Common & His Friends Were As Fresh As ’88 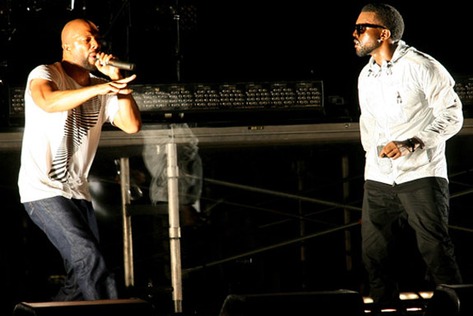 Dig if you will this picture: Hollywood on on balmy Saturday night. The promise of a Common show along with the anticipation of some quality Hip Hop in the mix. There were already expectations of who was scheduled to perform: De La Soul, Nas, Questlove and Ludacris. It was the element of surprise that took all those in attendance for a wild loop and has us screaming like wild banshees in the concert hall. To say that this concert is one of the best shows I've seen this year is true. To say that this concert was one of the most memorable shows I've ever seen since the "Fresh Fest Tour" I saw as a preteen is undoubtedly true as well.

Although the show started off a bit slowly with De La Soul's 20 year bond still as strong as ever, the pace quickly picked up and took off like a rocket once Ludacris showed up and showed out. I can honestly say that I have never been more excited to hear "Throw Them Bows" performed in my entire life. And judging from the vantage point I had above the crowd, the fervent hands reaching in the air and simultaneously expressing their approval was further proof that we were all in for a ride. Questlove and Black Thought took to the stage after De La and Common joined them to perform their classic "Love Of My Life." Did I mention the live band that included SoulBounce's Woman of 2008, Muhsinah? No? I guess I just did.

For those of us who remember the heyday of Yo! MTV Raps, seeing Heavy D and Queen Latifah perform their respective sets brought collective smiles to all of our faces as we all reminisced about how much fun Hip Hop used to be with its bright colors and dances that we all had to learn lest we be accused of not "being down." Speaking of Hip Hop's heyday, Nas took to the stage as billed to perform a few favorites, including "One Mic." Not surprisingly, Common joined him on stage to damn near spit "NY State Of Mind" in its entirely. Although I was no where near the stage, I vainly attempted to spit this song line-for-line, too.
Mos Def and Talib Kweli were in effect mode on stage as well, but alas none of my favorite Black Star songs were performed. Common did join them to do "Respiration" which was a great highlight. All was not lost, however, since both Talib and Mos performed a few of their greatest crowd pleasers, Mos with his "Umi Says" and Talib with his "Just To Get By."
The highlight of the evening came once Common apologetically explained that a certain someone declined to perform due to a certain incident that had him wildin' out less than two weeks earlier. After a smattering of boos wafted up from the crowd, Common proclaimed that "he who has not sinned can cast the first stone." And with that the band started up and Kanye West ran from stage left and proceeded to rip fervently into his set. In return, the crowd repaid the favor and brought extra energy. As annoyed with Kanye as I have always been, I have never denied his talent as an artist, lyricist, or producer. For that one moment in time, all truly was forgiven. I had no choice but to give it up and dance as hard as I could to a set that included "Flashing Lights" and "Make Her Say" with Common minus KiD CuDi.
All in all, the night was as fresh as the night in '88 when DJ Jazzy Jeff & The Fresh Prince, EPMD, and Public Enemy took to the stage in my hometown. Add to that the VIP tickets and free Hennessy drinks, and Common & Friends was by far one of the best Hip Hop shows I have ever attended. Be sure to peep the video below for a mashup of the night's highlights.
Much thanks to the Common Ground Foundation and Alloy Marketing & Media for making this night possible.