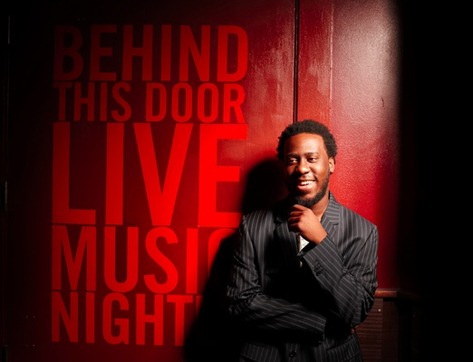 Pianist Robert Glasper is known to have jokes but credit the nervous
laughter that filled New York City's Le Poisson Rouge Sunday night to
his drummer Chris Dave. The Mint Condition & Erykah Badu alum's
ferocity elicited a series of moans from some affected female fans
leaving the rest of the audience feeling like we had stumbled upon
something intimate and quite clear on why Dave, Glasper & bassist
Derrick Hodge are recent additions to Maxwell's touring band.

Like Glasper, Dave hails from Houston and is a constant between the
pianist's two bands, the jazz-centered Robert Glasper Trio, which
trades Hodge for acoustic bassist Vicente Archer and the hip hop, rock
& soul imbued Robert Glasper Experiment, which includes
multi-instrumentalist Casey Benjamin. Both inclinations appear on
Glasper's third Blue Note album Double Booked, and he celebrated its
August release with sets devoted to each.


The jazz came first but after DJ Stimulus' Michael Jackson and J-Dilla
heavy warm-up rotation, Glasper played to the hip-hop literate. "This
is for y'all deejays," he said, vamping a bit, and then he eased into
his album's lead off track "No Worries." "Downtime" and "Yes I'm
Country (& That's OK)" added poignant balladry and hint of Sunday
morning sweetness to the mix before he ceded the sound system back to
Stimulus for another spell.

It was Glasper's second set that testified to his relative popularity
outside of the jazz world. Since the early aughties when college bud
Bilal provided an opportunity for him to show his keyboard and musical
direction skills, Glasper has played with or musical directed for
Q-Tip, Mos Def, Ledisi, Sa-Ra, Meshell Ndegeocello among others while
remaining solidly connected to the jazz community, notably doing time
in Terence Blanchard's band.

With a musical vocabulary reflecting that of a 32 year-old and with
life experiences that include the tragic loss of his mother to just
recently the birth of his first child, Glasper led the Experiment into
vast emotional and stylistic territory. Bassist Derrick Hodge, who has
produced for Common, put in work on "Festival" and the crew's melding
of Herbie Hancock's "Butterfly" with J-Dilla's "Fuck the Police"
referenced and exemplified breaking boundaries.
Energy among the multi-generational musician-heavy crowd surged when
Bilal took stage for his contribution to the album, "All Matter," but
may have crested with the Experiment's knocking take on the Stevie
Wonder-penned Michael Jackson hit "I Can't Help It." With Benjamin,
also of alt soul duo HEAVy, on keytar and vocoder, they opted to
stretch out the chorus. It made for a less vulnerable take than the
late King of Pop's; it was more matter of fact and eventually gave way
to Slum Village's "Fall in Love." Caught up, one pitchy dude sang
along loudly, "Don't sell yourself to fall in love." Some side-eyed
but most got the enthusiasm even as they disapproved of its
expression. Glasper and them rocked.