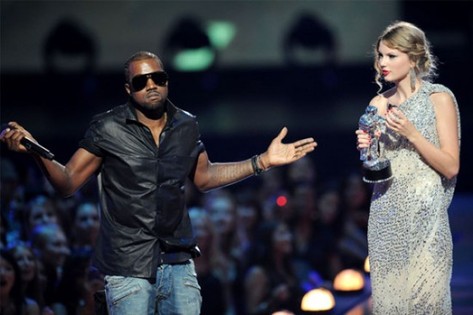 Until now, I have publicly refrained from saying anything regarding the Kanye West-Taylor Swift brouhaha that occurred this past Sunday. I have continued to voice my disdain and disappointment regarding his past behavior whilst I waited with baited breath for the proverbial shoe to fall. For America to say that they've had no more. And when I say America, I mean those people who have been such die-hard Kanye fans, those who called him a genius while his antics called for a proper time-out in a corner like a child. More specifically, I waited for the overwhelming non-Hip Hop listening masses to turn their backs on this troubled, spoiled soul. I think you know who I'm referring to.
Despite all of this, I was ill-prepared--nay, in denial--about what would result from Kanye's poorly-timed criticism of a blonde-haired Country singer who pop culture had deemed a princess with a soul as white as the driven snow.

This is but one example of what was aflutter on Twitter post-Kanye's mic-snatching on MTV's VMAs. And before you pass this off as an example of a subsection of society who regularly hail to a dead Führer and believe that people who are of African origin should return there, be aware that there is a growing discontent in this country that is completely counter to the ideology that our current President won the race on: Change.

There are people who continue to say and sadly believe that music is not political. If you are a regular reader of this website, you know this is absolutely laughable at best and ignorant at worst. As you may have noticed I have not weighed in specifically on Kanye's disruptive behavior. It goes without saying that I believe that he played himself in the biggest way possible. It also goes without saying that it takes incidents such as this to make people sit up and pay attention to the fact that the state of popular music is in shambles. The utter foolishness that this year's BET Awards were peppered with is more than enough proof. But I would have rather had CNN air the video of Drake and Lil Wayne while underage girls gyrated on stage as well as Kanye's rant. Or is foolishness only repeatedly aired when it happens to them and not to us?
I am not happy with popular music right now, nor have I been happy with it in recent years. I am not happy that people feel they have free reign to insult Black people when one of our own decides to act a damn fool. And I am sincerely not happy when I have to defend myself from the actions of one dumb person. Whether we like it or not, and even I have a difficult time accepting this, when one of us messes up, we are all looked at with disdain.
This year has been frought with change of a kind that I was completely unprepared for. Too much sadness and too much disappointment. Music is more often than not my escape from life's difficulties. Here's to hoping that our collective escape once again exceeds our expectations. And here's to hoping Kanye truly does take the indefinite sabbatical that he--and we--so desperately need.