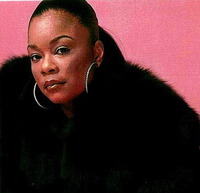 Much has been made this week of an old news item that was widely circulated purporting that Roxanne Shanté claimed to have received a Ph.D. from Cornell University on former label Warner Brothers' dime. The other shoe proverbially dropped, as did my mouth, when an item ran on Slate's website disproving these claims. Apparently Shanté, neé Lolita Gooden, not only did not receive a Ph.D. or any other post-graduate degree as she had claimed in this NY Daily News article, but Slate contends that she also did not receive an undergraduate degree from Marymount College as she had claimed. Furthermore, Warner Brothers denied financing her education to Slate. So to briefly recap, this would make Shanté as qualified to treat patients as Dr. Pepper or Dr. Dre. Videos such as the one below didn't help matters.

The Slate article did bring to light that Shanté was a victim of domestic violence and went to college under an alias supposedly after the 3 months Marymount had on record for her attending under her birth name. Given the events surrounding the Chrianna situation and the fiasco surrounding Chris Brown's Larry King Live interview--his bowtie spoke greater volumes than his mouth did--it does seems particularly feasible that Shanté could have changed her name and had another source finance her undergraduate education.
To be clear, did Shanté lie about receiving her Ph.D.? Yes. Does that bother me? Absolutely, since from personal experience receiving a doctorate was an experience that was both worthwhile and extremely horrendous. I don't claim to be a rocket scientist in my spare time, any more than I claim to have recently visited Saturn. Is it fair to believe Shanté's claims that she finished her Bachelor's degree under an alias? Sure. In the end, it seems that the person we need to hear more from about this is from Shanté herself.