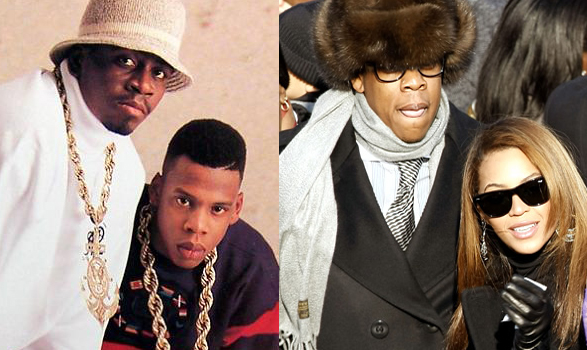 There has been much aflutter in the Hip Hop realm lately concerning younger rappers calling out older heads who earned a modicum of respect from everyone but the newcomers. Granted it's a pissing contest battle royale, nonetheless, but what's really at stake is credibility. Despite the midlife crisis that people within the community want to claim Hip Hop is experiencing, it's less of a crisis and more of a flexing contest. Despite many less seasoned, younger rhymers claiming that Jay-Z was washed up before he seemingly smashed on everyone with his 3rd installment of the Blueprint, the question that kept floating about was if Jay's age and recent experiences had left him fit for consumption by a younger, less loyal public. And have his experiences in the top tax bracket put him out-of-touch with anyone else who isn't flying around in private planes? In other words, can a blockhugger really turn into a street pharmacist?
Center

The key to answering this question really lies in the "less is more" adage. The less we hear about the questionable choices of Jay-Z and the other Hip Hop media darling, Common, the more the record companies can drool over them. The less baggage these artists have, the more marketable and attractive they can be to all, but especially younger, consumers. But controversy does sell, however. I mean, who didn't love Jay-Z a bit more when his rhymes were laced with drug game references? And who didn't love Common a bit more when he was a bit chubbier, grimier, and had a self-proclaimed drinking problem? I know I did. And so did my friends, but then again, we were young, dumb, and turned on by fantasy which Hip Hop has always provided its listeners.

As someone who is proud to say that I am as old as Hip Hop claims to be, fantasy no longer intrigues me. Rhyme to me about taking care of kids, doing dishes, and paying bills, however, and I'm there. See: De La Soul's 'Stakes Is High". Likewise, what 18-25-year-old wants to hear that? To hear any Hip Hop artist dominating the charts tell it, the party is where it's at. And that's where it should be, provided that your Hip Hop requirements are that you need several elements of escapism.

But let's get back to Jay-Z and Common. Their respective forays into youth-centric Hip Hop, Jay's Blueprint 3 and Common's Universal Mind Control, were met with very mixed reviews. If anything, this is to be expected since Hip Hop's fans are not all one age. While I may bemoan their attempts at Pop music, it makes perfect sense. Hip Hop, according to The Root's Andrew Nosnitsky is about "poor kids partying." And that translates into their musical icons dressing, speaking, dressing, and rapping larger than life. What it means for us older heads, more often than not, is extreme annoyance.

So can a blockhugger really become a street pharmacist? Can Superfly really leave "the life"? Can Hip Hop really grow up? Looking at Jay-Z, Common, Andre 3000, LL Cool J, certain Wu-Tang members, and countless others, one can. But not without planning on alienating your fans, young and old, at any given time.


TAGS:  common, jay-z
Previous: All The Hall & Oates You’ll Ever Need Can Now Be Yours Next: Melanie Fiona’s ‘Subway Series’ Is A Breath Of Fresh (NYC) Air