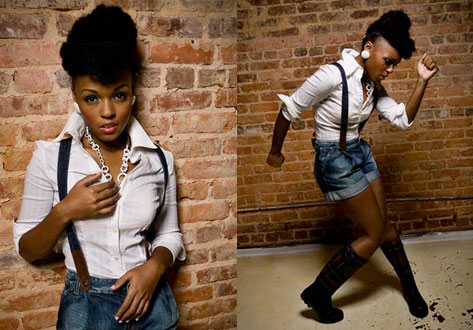 "Come Alive (War of the Roses)" is the newest single from music's most unique, pompadour-sporting cybergirl from outer space, Janelle Monáe, and when I say it goes hard it's an epic understatement. The track, recorded at Monáe's Wondaland recording studio for Kia's "The Soul Collective", is a dizzying, three-minute extravaganza. "Come Alive" is a White Stripes meets James Brown meets Janis Joplin meets Quentin Tarantino soundtrack rock-and-roll orgy; a well orchestrated temper tantrum over a menacing and snarky bassline. Monáe's voice is all haughty gasp, husky sass, and balls-out growls and wails. Around the 2:20 mark it hits a pitch and reverberation that can really only be described as reminiscent of the sickest Jimi Hendrix guitar lick. It's kind of incredible.

This chick is a f*cking rock star. I dare you to listen to this track and not come alive (like a schizo running wild). Watch a video of Monáe at Wondaland recording "Come Alive" after the bounce.

(Sidenote: With sponsorship deals from The Gap, Coca-Cola and Kia Motors along with inexplicably being signed to Bad Boy Records, is it safe to say that Monáe is the coolest sellout ever?*)

*I kid! She can do a commercial for pork rinds and I'd still be a stan.


TAGS:  audio, james brown, janelle monae, jimi hendrix, white stripes", wondaland
Previous: Mae Day Wants To ‘Give It All’ To You Next: Take A Sip Of N’dambi’s ‘Pink Elephant’