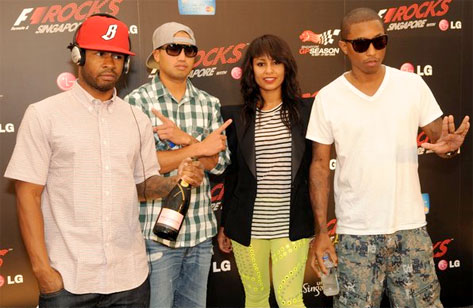 And then there were four. Those hip-hop rock star rascals N.E.R.D.--Pharrell and Chad Hugo of The Neptunes and the other guy*--have officially added a chick to the mix: R&B singer Rhea. The Canadian native has been touring with the group for some months and auditioned for the coveted slot via Skype with her rendition of "His Eye is on the Sparrow." Skateboard P talked to MTV about the decision, sure to drive their very dedicated, frat house fanboys into a frenzy of either adulation or hatred.

"Musically, we're just somewhere else [with her]," Pharrell told MTV News. "The music is now very 3-D. It's something you have to hear. But you'll see. We're definitely somewhere else. I want to leave that impact moment for when you purchase your download and you purchase your CD. The music is very three-dimensional. We're just really excited. We feel like N.E.R.D. has always been the punks of hip-hop and the outcasts of alternative music -- just a little different. But this time, we're taking no prisoners."

"Now you have this little Tinkerbell that's just stepped in and has been amazing," he said. "It's made it a fun process. We can go in so many more directions, because we have the vocal support."

I guess P was finally feeling the limitations of his trademark falsetto. I wonder if they will be re-imagining their old songs with Rhea as well? She could obviously take the chorus of "Lapdance." Will she simply play best supporting artist when they perform crowd favorites like "Rockstar" or "Everyone Nose"? I'm wary but intrigued. I guess. I'm trying not to make a cliche Black Eyed Peas comparison here.

The upcoming album from the new N.E.R.D., Instant Gratification, is scheduled to drop sometime next year. In the meantime, the foursome will be joining Jay-Z on his Blueprint 3 tour this fall.