Home Diggin' in the Crates, Listicle, Month of Mary

13 Reasons Why Mary J. Blige Is The Undisputed Queen Of Hip Hop Soul 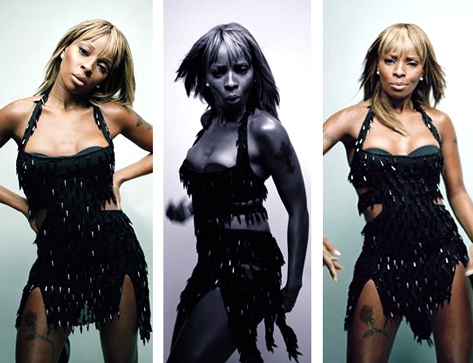 No month-long homage to Mary J. Blige would in any way be complete without acknowledging her profound contribution to the genre known as Hip Hop Soul. When she was anointed its Queen by the King of Overexaggeration, Puff Daddy as he was known then, I will admit I did a double-take. True, the title fit and, yes, Hip Hop Soul as a genre made sense since that is what Mary was belting out on What's The 411?. What neither of us knew at the time was the extent to which Mary could hang like the boys and sing with all the intense fury that is often required over hardened Hip Hop tracks. By that same token, Mary's ability to flip the script and ooze sweetly like honey over the toughened comb of a raw yet tender Hip Hop track is still unrivaled. That being said, allow me to introduce the best MJB Hip Hop collabos as complied by yours truly.

1) Mary J. Blige & Grand Puba
One of Mary's first stints was singing background for Father MC--as was Jodeci's I might add--but she parlayed this into true street cred when she aligned herself with Brand Nubian's Grand Puba in 1992.

In 1992, the "Most Infectious Beat Of The Year" props has to be given to Pete Rock for his and CL Smooth's classic "T.R.O.Y." It was obviously a no-brainer that Mary's "Reminisce" could be merged with "T.R.O.Y." to create a wholly expected yet wonderfully executed remix.

I'm not going to lie and say that this track really improved upon the original. "You Remind Me" was the sweetest, most innocent track from What's The 411?, and was the perfect way to open that album to a name and voice we were not familiar with. Although Greg Nice's nonsensical rhymes were the perfect foil to Mary's sensical tale of nostalgia, I always felt like this remix needed a bit more. A tad bit lazy, but nice nonetheless.

After Keith Murray took Hip Hop by storm by displaying just how well he could dance on top of a Lexus coupe and be unable to demonstrate proper superlative use of the word "beautiful," he found himself on this strong remix for Mary's first single from My Life. The original track kept us bopping in our cars and on the sidewalk. This version kept us moving in the clubs.

5) Mary J. Blige & Method Man
There really isn't much introduction needed for this one. Not only did "I'll Be There/You're All I Need (Remix)" further catapult Method Man's half-cornrowed-headed self into the stratosphere back in 1995, but it firmly cemented Mary's ability to lace a track with an understated elegance, like that proverbial rose growing out of the concrete. This track was rough but was able to portray the tough-as-nails bond of love in an inner city world.

1995 was a great year for Mary and other Hip Hop Soul collaborations. I think we can all agree that "One More Chance" was an instant classic. Since we already got all up into this one, I'm not explaining anymore. Plus, if this isn't the most angelic I've ever seen Mary, then I don't know what is.

One year passed and Mary continued to kill 'em by lending her emotion-inflected voice to this tearjerker of a track on the super stellar debut by Ghostface Killah, Ironman. "All That I Got Is You" is great for when you have nothing better to do than thank God for your Mom and weep for a good five minutes. I guess Mary was too busy to make an appearance in the video, so Tekitha stood in as her understudy.

"Touch Me, Tease Me" was really a vehicle for the woefully underage Foxy Brown in a track for Mary's beau at the time, Case. "Touch Me" was a great Summer jam, although it really didn't feature a particularly strong presence from Mary. Nonetheless, thi joint is still head-nod-worthy 12 years later.

Mary was quite contrary towards a particular fool who did her wrong on this banger of a track from her 1997 album Share My World. Though this album featured a track with Nas, "I Can Love You" was the one that kept it hot in the clubs, courtesy of she-whose-legs-could-not-stay-closed--on her album cover, that is--Lil Kim.

1999 brought a softer, gentler Mary and her self-titled album Mary reflected that. Mary's bold fashion choices calmed down a bit and her album, a great cross-section of who she had grown into as a person featured artists as varied as Aretha Franklin, Elton John, and Jadakiss. Speaking of Jada, he and Mary tried to embody sweet and rough versions of sexiness with the use of Michael Jackson's "I Can't Help It" and their vision of "Sexy."

Also from Mary, "Your Child" was a heart-wrenching tale of discovering that your man has not only another life but another child with another woman. The album version was all saddened, coming-to-acceptance Mary. On this remix from 2000 with Ghostface, Mary sounds as though she's damn near screaming on her man. Oh well.

I've already extolled the greatness of this track. I still love it, just can't get enough of it, and marks the third great Hip Hop collaboration from Mary. And in a nod to both Ghostface Killah and Bob James, the slowed beat from "Daytona 500," recycled from James' "Nautilus," is killer.

I never really knew how to feel about this one. I mean, "Back To Life" played a prominent role during my transition from junior high to high school and one must never attempt to remake a Caron Wheeler track or else. But it only flew because it was Mary. She doesn't sound as strong as Caron in parts, but she sounds as though she's having fun. As though a producer couldn't get any worse than Puffy injecting himself on tracks comes DJ Clue. Jadakiss comes through in the clutch with a node to Big Daddy Kane's "Smooth Operator" so all ultimately is forgiven. This rocked many a late night session, but the original still rocked the opening sequence to Hype Williams' beautifully shot, technicolor, and full-of-glistening-brown-skin movie that was Belly.

You've likely noticed that I have not mentioned Mary's work on Jay-Z's Reasonable Doubt and with good reason. That track is nice, amazing even. But this live version from Jigga's Unplugged album took the original and turned it on its ear. Mary killed this one and hyped her "Family Affair" track by singing its hook at the end. Mary is best when she lets loose, and that is exactly what she did.

There have been many other Mary Hip Hop collaborations from 2001 until now. None of them, however, have really captured the true Mary J. Blige that I have come to love. The newer remixes seem to be a bit tame and don't use Mary's unrestrained passion to its fullest effect. I'm not even going to comment on the new track she has with Drake except to say that I think she looks absolutely amazing. But if I wanted to know what Rihanna will look like in the future, I could have just waited until that day came to pass. No offense, Mary. In any case, feel free to leave additions to this list in the comments. If nothing else, Mary's passion for the music she sings is only rivaled by the passion her fans have for her...and her remixes.