Getting ‘Love’ From Boyz II Men 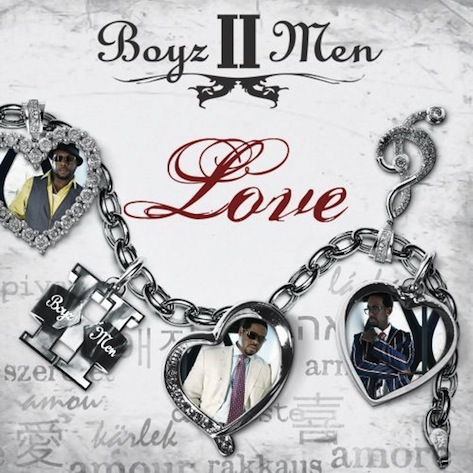 You already know how I feel about Boyz II Men. Their harmonies are uncanny and their image remains wholesome as sweet potato pie. For nearly twenty years, Nathan Morris, Shawn Stockman and Wanya Morris have given us a consistent stream of timeless ballads delivered with vocal perfection. Love is the latest contribution to their legacy. It features some of the greatest, tear-jerking, heart-on-your-sleeve tunes of the 20th century--re-imagined by this dynamic trio. This album transcends R&B while covering more than five decades of love songs from various genres.
Center

Boyz II Men covering Cyndi Lauper? Their rendition of "Time After Time" feels like they are making a special guest appearance on Glee. The fellas pull it off by maintaining their soulful masculinity throughout the '80s pop hit.

Canadian pop star Michael Buble joins Boyz II Men on "When I Fall in Love." Its lush, harmonized intro leads you into a soulful execution of the classic 1956 standard made popular by Nat King Cole. Michael sounds awkward alongside the heavier tenor voices and while the electric guitar doesn't ruin the track, it disturbs the sexy of the song's climax.

"Open Arms" and "If You Leave Me Now" are solid, but the biggest surprise on this album is the bluesy interpretation of Bonnie Rait's country hit, "I Can't Make You Love Me." Starting with strong lyrics and a deep fried instrumental, the Boyz make this song their own with their unique flow providing good contrast to a familiar melodic line. "Could It Be I'm Falling in Love" puts the fellas back in their comfort zone, but the upgrade in music production loses the warmth found in the Spinners' original 1972 version.

Boyz II Men: "Could It Be I'm Falling in Love"

Boyz II Men has added another solid cover album to their catalog. While there were some obvious misses and uncomfortable moments, Love is an adventurous journey through varied styles and moments in time -- with three of the greatest voices of our generation as the vehicle. With this being their third cover album in past five years, I'm beginning to wonder why are they settling their talents in the cozy confines of already proven standards?

I was ecstatic to get my hands on this album simply because it was Boyz II Men. It could have been a 40-track box set of Hungarian folk music remixes and I would have been satisfied -- as long as my brothers were on the vocals. But I have to be realistic. I'm sure I speak for most Boyz II Men fans when I ask: "Where is the new, original material?" For younger fans, I'd hate for such a legendary group to be known as "that cover band."

Love is a nice album, but at the end of the day, it pacifies as we hope and pray for a true Boyz II Men revolution. Perhaps our prayers will be answered when they drop their 20th Anniversary album in 2011. Until then, Love will have to do.