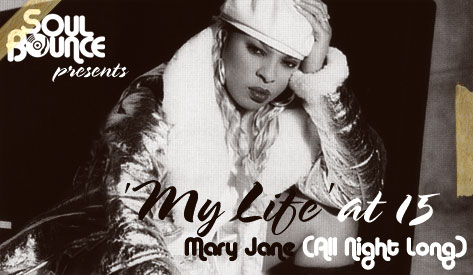 And with those lyrics, it was on. The first track on My Life, "Mary Jane (All Night Long)" set the tone for what would be the project's central theme: We fight too much. Don't love enough. The mere fact that Mary J. Blige had to almost beg her lover to "come into her bedroom" spoke volumes of where the relationship was. And how perfect was the music? Sean "Puffy" Combs, Chucky Thompson and The Hitmen brilliantly mixed The Mary Jane Girls' "All Night Long" with Rick James' "Mary Jane" and sprinkled some "Close the Door" by Teddy Pendergrass in for good measure--three songs that would go on anyone's slow jam tape. The seductive beats reiterated Mary's pleas, as if to say, "Come on, boy. Get with all of this." And he wouldn't. Which was the story of Mary's life. One that we were now ready to read from cover to cover.