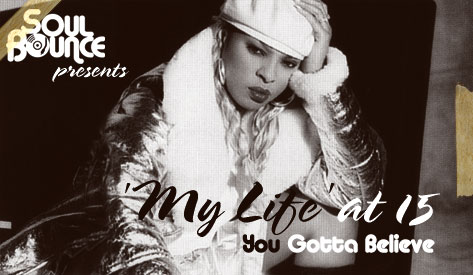 It's no secret that My Life was: (1) an open love letter from Mary J. Blige to K-Ci Hailey; and (2) a cornucopia of '90s R&B drenched in soul instrumentals from the '60s and '70s. Unlike the majority of the album, "You Gotta Believe" wasn't anchored in a sample. The Herb Middleton-produced ballad followed the New Jack Swing playbook with its kick drum, rimshot and syncopated triangle poured over soft piano chords and subtle bass line. Mary's vocal plea of assurance was filled with gruff desperation despite the velvety accompaniment.

The contrasting tonality captured the dysfunction that often surrounds torrid relationships and fragile self-esteem. Mary's language of love sounds tainted and perfect simultaneously as she petitions for justified angst disguised as companionship. We tend to love those who hurt us the most and find reasons to keep them. Mary was no different. She sung the feelings we were too ashamed to admit. She brought in New Jack crooner, Big Bub, to build her case in the first bridge. K-Ci claimed he heard her "loud and clear," yet Mary commissioned Faith Evans' sultry harmonies in the second bridge to seal the deal. The trio was convincingly pure and, quite frankly, more than what the Jodeci frontman deserved. But she loved him and we understood. We believed you, Mary.
Center