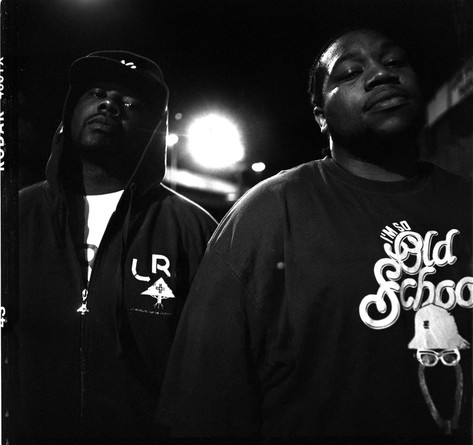 Ever since hearing the news that Little Brother had decided to hang their mics up as a duo, I've been in mourning. Because, you see, way before I developed a love jones for The Foreign Exchange's brand of Soul Hop, it was all about Phonte and Rapper Big Pooh (and 9th Wonder, too, before he bounced). With each criminally underrated album--The Listening, The Minstrel Show and GetBack--these brothas reminded me of why I fell for Hip Hip in the first place. Their combination of banging beats, snappy samples and witty wordplay gave me what I needed when I wanted it. So when they decided to go their separate ways, I understood why given their other musical pursuits but it's been hard to get over.
Center

Now with the announcement that their fourth and final album, entitled LeftBack,
is dropping on April 20th, I can grieve a little less knowing that Tay
and Pooh have something dope in store for their fans. They've enlisted
the talents of Khrysis, Zo!, Symbolic One, Darien Brockington, Chaundon, the First Lady of FE, Yahzarah, and numerous others on LeftBack, which will be released in a combo CD/DVD on Hall Of Justus. Looking to step their music video game up, the DVD will include videos to three cuts from the record.

I don't know about anyone else, but for the first time in a long time, I'm excited about a Hip Hop album. Leave it to Little Brother to elicit that feeling.