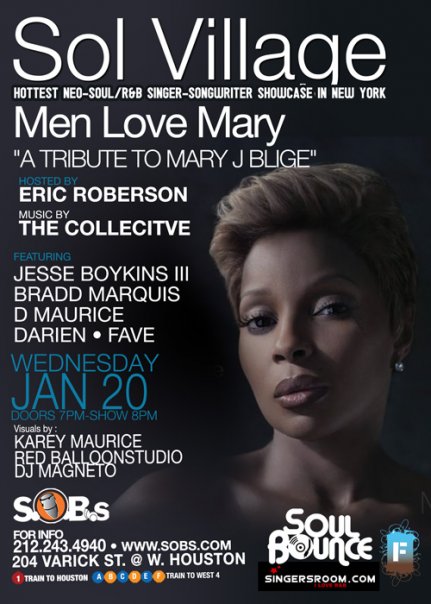 It all started with a thought. To celebrate the Queen of Hip Hop Soul, Mary J. Blige, with a month's worth of praise on the fifteen year anniversary of her seminal work, her lasting opus--her sophomore album, My Life. From there, we took it to the next level. After a lot of hard work, from placing phone calls to sending emails to calling in favors, and finally assembling a dream team of talent--the mixtape SoulBounce Presents: Men Love Mary: A Tribute to 'My Life' came to life. Judging from the download numbers, you guys like it. You really like it. Some have even called it our coming out party. Maybe. But what if we were to invite you to come out and party with the artists who were featured on the mixtape?

Well, consider yourself invited, as the Men Love Mary Movement goes live on Wednesday, January 20th here in New York City at the home of one of our greatest partners, S.O.B.'s. The concert, hosted by the incomparable Eric Roberson ("My Life"), will feature soul brothers Jesse Boykins III ("No One Else"), D Maurice ("Mary's Joint"), Darien ("Be Happy"), Bradd Marquis ("Never Wanna Live Without You"), TL Cross ("You Gotta Believe") and Fave
("Be With You"), as part of the venue's monthly Sol Village event. Team
SoulBounce will be well represented, so you'll get to meet the
faces behind the words (as if you don't know us already. Heh). Doors
open at 7 pm, with the show kicking off at 8. Tickets are available
right now on the S.O.B.'s website.  And of course, next week, we'll be giving away tickets to a few fortunate readers.


So, the fellas will be there. And we'll be there. All for the
love of Mary. I guess the only question that remains is, Will you? Say
yes. We'll see you there.