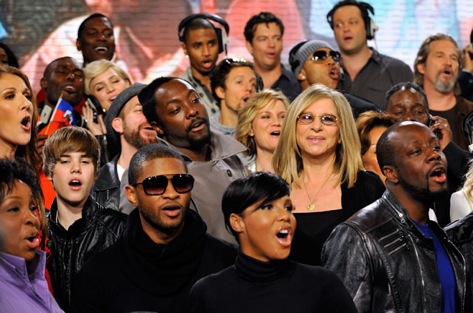 Now that we've had a week to marinate on "We Are The World 25," we here at SoulBounce still have the same reaction now that we had when it premiered last Friday and are in agreement that despite the best of intentions, this was an EPIC FAIL. We happen to agree with Jay-Z that "We Are The World" is something that should have never been touched. Ever. We really don't know what Quincy Jones and Lionel Richie were thinking when they had this bright idea to remake this classic as opposed to creating a new song just for Haiti, but it was a mess. Yes, there were moments of brilliance (Jennifer Hudson, Mary J. Blige, P!nk, Mary Mary), but by and far, the vast majority of featured participants on this remake should have never been allowed in the studio much less on the mic. There was a gross misuse of the talent on hand (Anthony Hamilton, India.Arie, Faith Evans) who were relegated to singing in the chorus, while more mainstream artists were allowed to have their way with this song. To say that we're displeased with how this turned out, would be an understatement. See our rundown of 12 artists who we could have done without hearing or seeing on "We Are The World 25" in their order of appearance after the bounce, and please continue to donate to Haitian relief efforts but not buy purchasing this tragedy of a song.
Center

1. Justin Bieber. Who? No, seriously. Exactly who is this fetus who opened the song? -- Ro

2. Nicole Shenanigans Scherzinger can sing better than me, I'm sure. Can she sing as well as Jennifer Hudson? Hell to the naw. Was it therefore justified for her to be standing next to Jennifer Hudson? No. Was it completely justified for JHud to give her the side-eye of all side-eyes? Yes. Did I laugh my ass off when I saw it? Yes again. -- ill Mami

3. Tony Bennett. Whereas I respect my elders, I can respectfully say that Tony Bennett was not up to the task of taking part in the remake. He sounded like a hot garbled mess. -- Moon

4. Michael Jackson. This was such a misuse of MJ's
gravitas that it's depressing. Even though he co-wrote the original,
incorporating him in such an unnecessary and sloppy way feels like the
end of using his death to manipulate emotional responses from the
public. Sadly, it's probably just the beginning. -- Ro

5. Janet Jackson was just wrong. She knew she could have done something--anything!--to avoid Michael's ghost singing that song again. But what really was the point again of including footage that we have already seen ad nauseum of Michael singing his parts from the original WATW? Oh yeah. For the producers of this farce to be able to say that they had footage of Mike singing "from the grave." Too bad he's likely rolling in his gold-encrusted one. -- ill Mami


6. Enrique Iglesias may be a human Hot Tamale, but eye candy aside, can we just all touch and agree that this dude can't sing? And this was not the occasion to be painfully reminded of this fact. -- Butta

7. Wyclef sounded like a goat getting his appendix removed without anesthesia. That is all. -- ill Mami

I know that Clef is hurting about what happened to his homeland, but he really didn't have to make us hear his pain in song form. His bleating was the absolute worst he's ever sounded. -- Butta

8.-10. Lil Wayne/Akon/T-Pain are the Axis of Evil. The are the living, breathing embodiment of the word "wack." How dare you clowns defile this iconic recording with Auto-Tune? Thanks for giving me another reason to dislike the entire lot of you. -- Butta

11. Jamie Foxx as Ray Charles was wrong on so many levels. While Ray Charles would definitely have been one of the elders we would have enjoyed seeing in the remake, his passing, of course, didn't make that possible. But, leave it to funny man Jamie Foxx to be unfunny in doing an impersonation of Ray in the WATW25 remake. Given the appalled look on Jenifer Hudson's face when she glances at Jamie shucking and jiving while in full Ray mode, I would bet that others there on the set were asking the same question.
-- Moon

12. LL Cool J really needed to sit down with that long ass rap. Oh my God, it was like it wouldn't end. He kept spitting and spitting. I love LL and Hip-Hop as much as the next person, but his rap segment went on for way too long and was unnecessary. He needed to keep it short and sweet like Kanye did. -- Butta

Now that that's done, let's relive the magic and majesty of the original, shall we?