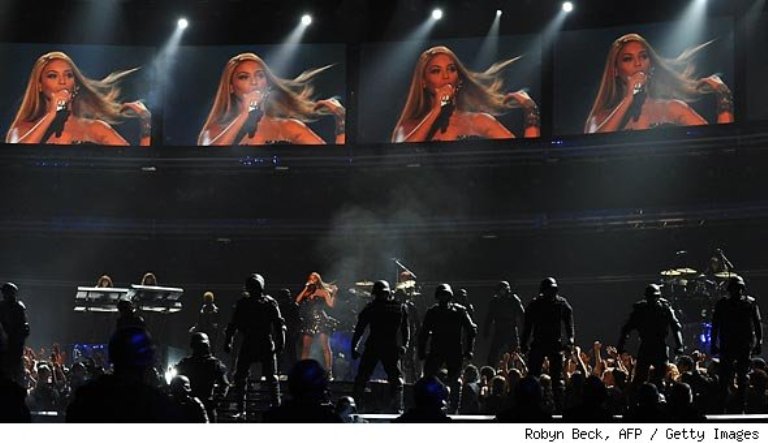 While there was much more vested interested in The Grammys this year since so many SoulBounce favorites were nominated, old habits die hard for the award ceremony. Or, in the case of The Grammys, old habits are like zombie roaches with combat training and a profciency in nuclear technologies. This always results in a somewhat entertaining spectacle with a bevy of snarkable missteps. A forecast of nothing but the increasingly political "celebration" of a few industry vetted, multiplatinum selling pop stars, here are five things I learned from this year's Grammy Award Show.
Center

1. Even Lady Gaga can't out Gaga herself six months ago

The problem with setting the bar for bizarreness impossibly high with blood play and Warholian irreverence is that bizarre is bizarre. At a certain point it's like chicken and kinda tastes the same no matter how you prepare it.

2. The webcast awards presentation is where The Grammys' pay penance for their more public indiscretions

It's like having a hidden camera in a confessional. Maxwell got his first, hard-won Grammys there this year. India.Arie is still getting make-up Grammys for the Alicia Keys Factor of 2002. This is also where we will see most, if not, all Hip Hop categories in a few years.

4. Her first target is Rihanna

5. Even though he paved the way for Taylor Swift's sympathy Album of the Year win, Kanye was missed

After the jumbled coonery of Jamie Foxx and T-Pain and the mush-mouthed and overly-edited performance of Lil Wayne (note: Eminem's prowess is duly noted, as is Drake's questionability), the antics of his concentrated egotism and fiery indignation feel at least marginally more cohesive and prescient.

If you watched, what did you take away from this year's Grammys, fellow SoulBouncers?