Wyclef Redeems Himself With This ‘Song’

I know we called Wyclef out for his less than stellar performance on the "We Are The World" remake, but it needed to be done. We felt his passion, but we didn't need to hear the peal of his off-kilter yodeling. No goats were sacrificed, however, at this recent concert in Vail, Colorado when Clef toned it down and gave a pretty solid performance of two reggae classics: Bob Marley's "Redemption Song" and Brent Dowe and Trevor McNaughton's "Rivers Of Babylon." This video features footage of the live show with photos of Haiti before and after the earthquake mixed in. Wyclef is also joined on stage by South African singer Zulu who lends her voice to "Redemption Song." Now this is something that I can support and listen to without wincing. 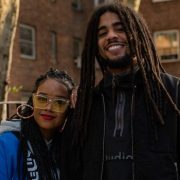