El DeBarge Is Back!

Quiet as kept, El DeBarge was granted an early release from prison last year and was recently interviewed by Brian McKnight for his self-titled talk show. El is looking great, much better than many men his age and really can--ahem--still get it. In the interview below, El explains how his brother Chico had to coax him into actually recording his classic "Time Will Reveal" and speaks on his struggle with drugs over the years. Cutting to the chase, I'll just say that El performs "Time Will Reveal" while simultaneously playing the piano in the video after the bounce. He sounds absolutely amazing. While I furiously Google his touring schedule, ladies keep swooning and light-skinned men keep rejoicing that one of the best to ever do it is defintely back.


TAGS:  brian mcknight", chico debarge, el debarge
Previous: Get A ‘Window Seat’ Next To Erykah Badu & Jimmy Fallon Next: Morning Soul: For Every Win Someone Must Fail 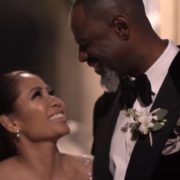