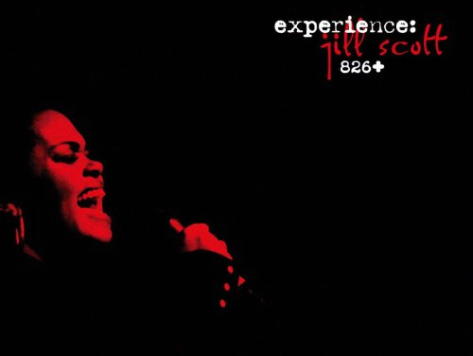 While bouncing around some websites, I noticed that some had compiled lists of feminist* songs. But the closest that these lists came to the types of music we feature here were Aretha Franklin and Destiny's Child. While these women have produced some empowering songs, the exercise deserves a more SoulBounce-specific treatment. This investigation may extend past the month of March (or not, we'll see) but in honor of Jilly from Philly, the inaugural case study is Jill Scott's "Thickness" from her 2001 album Experience: Jill Scott 826+.
Center

Nestled into the live follow-up to her debut album, "Thickness" details the objectification of a "young, tender, supple and fine" black teenaged girl and its effects. Scott scorns the men who ogle her, and men who have ogled young ladies just like her, by narrating in explicit, unsettling detail their dirty thoughts. Hearing it as a recording is sobering enough. She performed this at a packed live show after what sounds like an encore chant from a hometown crowd.
Though she's never been shy about her support for women, I'm sure many men (and women) were floored by her incisive narrative. They just wanted to hear about being loved from their hair follicles to their toenails, and listening to breezes and smoking trees. They didn't buy a ticket to hear about how developing breasts might shift during certain acts with hungry-ass, grown-ass men.
But rather than digressing purely into male-bashing territory--and at just the right moment--she turns her attention toward the young protagonist, explaining (twice) how she's been "degraded, exploited, not celebrated..." not just by men but by entertainment media. Her self-worth is as fractured as the disembodied booties and breasts that "don't have nothing to do with the song." From there Scott sings a pointed prayer about lifting this child so that she can gain a healthier understanding of herself, how "magnificent" she is in body and in mind. Scott ends the poem/song by repurposing the term "big," emphasizing how full she is as a person.
Aside from its message, what makes "Thickeness" a feminist* song is that Scott didn't compromise what, in part, has attributed to her mainstream success since its beginnings--her warmth and relatability. Though she says some infuriating and horrifying and painful things that would excuse more fiery indignation, she allows the story to ground her performance and hold us as listeners. As abrupt as it may appear in the context of that live album (and surely in the context of that concert), she doesn't have to sell it for us to believe its genuineness. We know she believes it and lives it. And if that isn't some good feminism, I don't know what is.
*I'm aware of the various types of feminism and their surrounding discourses. Rather than get bogged down in those debates, because this is a music blog, I'm using a very basic definition for these purposes that can be found here and here.