Movie Soundtracks Worth Doing A ‘Kanye’ For 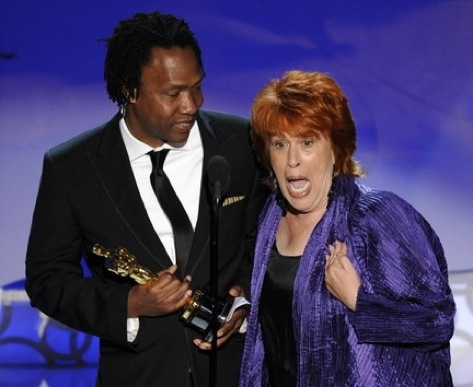 Whether you were watching the Oscars last night to witness Mo'Nique win for Best Supporting Actress for her role in the movie Precious or you wanted to turn on the famously boring awards show to lull you sleep, you may have caught the infamous speech interruption of the evening which is being called the "Kanye" moment of the night. Of course, referring to the incident at last year's MTV VMA's when Kanye West took the microphone from poor little Taylor Swift.

Last night's drama involved filmmaker Roger Ross Williams, director of the documentary Music by Prudence, who was bumrushed during his acceptance by a white woman in purple, faintly resembling a cross between The Facts of Life's Mrs. Garrett and Mrs. Roper from Three's Company. She rambled off a speech few of us understood, leaving us to scratch our heads and ask, "is she high?" after, of course, asking the question of the night, "who the hell is she?"

Come to find out, this woman, Elinor Burkett, was an
early producer on the film, which focuses on the life of a disabled
young woman from Zimbabwe who is the lead vocalist of the band Liyana.
Burkett has told the press that the movie was her idea and should have
been more inclusive of the stories of all of the members of Liyana
instead of focusing on the title character, Prudence. While
Burkett didn't explain all of that to us last night while she cut off
Williams, it is kind of understandable if she was in her feelings about
being dissed and not included in the prior celebrations honoring the
movie. At the end of the day, Burkett did credit the music of Liyana
for being the prime character of the movie.

Burkett and her drama led me to think about what Kanye-like bumrushes I
would have liked to see happen during past awards shows held this year
that did not recognize some of the dopest movie music and soundtracks
of the year past. While 2009 had a weak showing of great films, there
were some pretty decent soundtracks released. You'll see that while
some of the movies themselves were maybe a bit lame, the soundtracks
that they produced are worth a listen to.

1. A Good Day to Be Black and Sexy [Soundtrack]

The indie film, A Good Day to Be Black and Sexy, came out in
2008 and was a daring attempt to highlight the lives of multiple
residents in Cali during a very hot day. Shot through vignettes, each
scene seemed to be accompanied by some of the illest music that I had
never heard before. The soundtrack, which garnered pretty hot attention
in 2009 was a bonafide winner. My favorite was Allegra Doloros' "The Music OK" and I even enjoyed Sheena Player's "Tonite," which reminded me of early grooves by the late singer Aaliyah. This soundtrack is like that, very deserving of having a Kanye pulled on its behalf.

The movie was not that good, but the soundtrack for the film Notorious was a great commemorative item for the life of arguably one of the best MCs of all times--the Notorious B.I.G aka Biggie Smalls. With only two tracks on the soundtrack from artists other than Biggie--one being Jay-Z's anthem to his neighborhood in "Brooklyn Go Hard" and Jadakiss' "Letter to B.I.G."--the soundtrack included some of Biggie's bigger
hits ("One More Chance" and "Hypnotize") and some tracks that listeners
outside of true fans may not be so hip to, including "What's Beef."

While I was not one of the biggest Biggie fans while he was living, I
do have great respect for him as having that skill to kick some of the
more complex rhymes straight off the dome. If a Kanye was done on
behalf of this movie, it would have to be done to encourage folks to
not sleep on the soundtrack even though the movie was pretty wack.

While the movie Obsessed, which featured It-girl Beyonce and the delectable Idris Elba, was panned for its rip-off of the movie Fatal Attraction, the movie's soundtrack is worth an honorable mention. Martina Topley-Bird's "Soul Food" is pure lovely while "Any Other Day" by Wyclef and Norah Jones is an unexpected delight.

What
was weirdest about it all was that the producers of the film decided
not to release the soundtrack as an lbum. Instead, while the
songs are used in the film, they are on the records of the individual
artists featured.

Looking at this short list, it goes without saying that we need more good soundtracks. Movies and
music used to go hand in hand, but there's been a serious lack of the latter in the former in
recent years.
Are we the only ones who miss the movie soundtracks of old? Why do you think they're not being made anymore? Leave your thoughts in the comments and let us know if there are any under-the-radar soundtracks we should be checking for.


TAGS:  "roger ross williams", academy awards, elinot burkett, kanye west, liyana, mo'nique, movies, oscars, soundtracks
Previous: M64 & Grillade Get Out Of ‘Pocket’ Next: Morning Soul: This May Come As Some Surprise, But I Miss You