SOUL-POLL: What Is Your Favorite Whitney Houston Album? 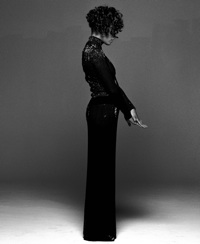 It's hard to believe that over the course of her 25-year career that Whitney Houston has only released six studio albums. Yes, she does have a Christmas album, a greatest hits collection and numerous appearances on soundtracks to her credit, but surprisingly enough just six albums. What isn't surprising, however, is that even with what could be considered "just a few" records on her discography that she produced so many hits. From the '80s to mid-'90s, Whitney was the Juggernaut with chart-topper after chart-topper. Hardcore fans know that when a new album of hers hit the street, it was essential to hit the stores on new release Tuesday to add it to your collections. It was that serious.
Right

So looking back over the first 25 years of Whitney's career and her arsenal of hits and some misses, we're curious about what everyone's favorite album of hers is. We've set up a poll and included all of her albums, soundtracks where she sang at least 50% of the songs and even her greatest hits set to round us out at a perfect 10 to choose from. Vote right here then logon to our Facebook page next week for the result.