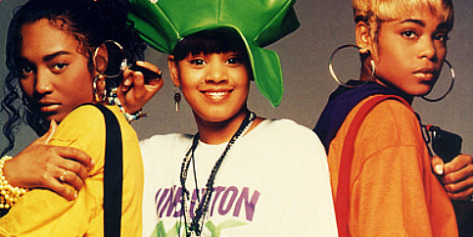 Although keeping these studies within the 21st century was an unspoken goal, when serendipity enters the equation they can dip into the more distant past. So, when I heard Chilli acknowledge she considers TLC feminist in a recent interview promoting her reality show, they had to be highlighted here. (She also digresses about how men write so many songs, including feminist ones. We won't go there for now but I'd be remiss to overlook the comment.) Maybe more than any of the albums that followed, Ooooooohhh...On The TLC Tip focused on women power. Songs like "His Story," "Bad By Myself" and "Depend On Myself" were all about affirming control. And all would be worth highlighting. That said, let's take a look at "Hat 2 Da Back."

Those of us in the know recognize that TLC have considered themselves feminists for a long while, so Chilli's comments aren't a shock. But in listening to "Hat 2 Da Back" again, considering what they were directly responding to--people judging their femininity by their clothes--it is really confrontational. Having burst onto the New Jill scene with a song about not playing coy when it comes to getting some, "Hat 2 Da Back" served as an appropriate final single.

A major portion of the group's personality as a group hinged on outspoken defiance. They could be wearing the baggiest, loudest clothes with the most outlandish accessories, be aggressive socially and sexually and not be compensating for anything. This song proclaimed that it was not a compromise to their respective womanhoods to dress how they pleased.
"Hat 2 Da Back" was an important moment in the diversification of the New Jill girl groups of the nineties. While there were similar self-affirming, power anthems coming from groups like En Vogue, they were also couched in a more typically feminine presentation. And TLC would probably argue there's nothing wrong with that. They were calling attention to the fact that both femininity and sexiness are subjective and that it is a woman's prerogative about how she embodies both. It was and is an empowering statement.

TAGS:  audio, chilli, feminist, tlc
Previous: ‘How’ Does Taihisha Do It? Next: Brandy Is Getting Bran’Nu On Us