Janelle Monáe Is ‘The ArchAndroid’ 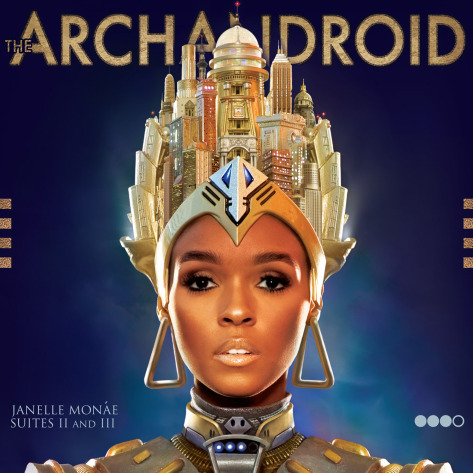 As difficult as it may be to listen to an entire album from start to finish in this Age of the Internet, The ArchAndroid should probably be experienced at least once from start to finish. Imagined by Janelle Monáe as an "emotion picture for the mind," and a follow up to Metropolis: The Chase Suite, this album is as sweeping as the welling strings on many of its tracks. Starting and stopping at "Tightrope," though understandable, just does not do The ArchAndroid justice. But as a hype builder and dance starter, the song is an overachiever.
Center

Monáe traverses at least sixty years (or more) worth of musical styles and bounces between genres without warning. In doing so, she guides us through her musical dreamscape, which is, by default, loosely cohesive and full of wonder. It's a place that swings ("BaBopByeYa"), that rocks ("Come Alive"), that enchants ("Oh, Maker"). It all comes together in the way that sometimes the last thing you listened to before sleeping leaves its traces on your subconscious and soundtracks your REM.

But with interludes that sound like they belong behind the opening credits of a 1950's underwater movie musical set in a medieval monastery/old Las Vegas lounge.

Cindy Mayweather, her android alter-ego, and the futuristic locale of metropolis have always functioned as tools that Monáe uses to convey messages of love, hope, rebellion and social critique. The ArchAndroid seems more about these themes than about overtly propelling the more theatrical narrative forward. It's a good time either way.

For those who are less interested in whimsy and trans-genre dynamism, "Dance or Die," "Faster" and "Locked Inside" is an incredibly danceable grouping that opens the entire album with gusto while giving a sense of where she's headed without taking it to the extremes that come later. After that run, there are less hand-holding transitions but they still work together. For example, when she segues from 1960's pop chanting with Deep Cotton on "57281" to some pure Stevie Wonder Latin-synth romanticizing in "Say You'll Go."

The album doesn't attempt to hide its references. It revels in them. Manipulates us into submission, even. It's just as hard to be unmoved by "Say You'll Go" as it is not to get riled up by "Tightrope." Devices she employs on The ArchAndroid are similar to those used on Metropolis (think "Smile" and "Many Moons"), but here she does so much more liberally, more gorgeously.

Circling back to the idea of "emotion pictures" she applies to these songs, one of the reasons that this album works, even if you don't buy the concept, is that Monáe is a sentimentalist. (Another is that she has the vocal chops to pull of this range of styles not just with ease but with flair.) Aside from smashing as many music references into eighteen tracks as possible and with frequent jolts from one style to the next, which is admittedly exhausting sometimes, she isn't taking us into abstract places. She takes us to Rogers & Hammerstein, to Jimi Hendrix, to David Bowie, to Lauryn Hill. This makes it hard to not find something enjoyable on The ArchAndroid.