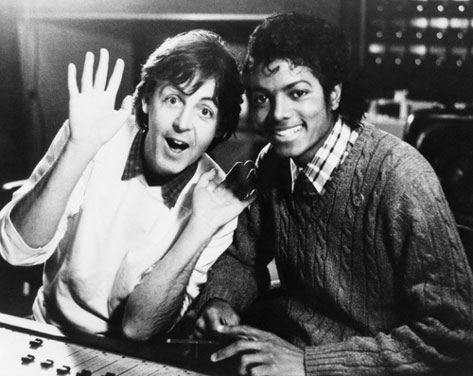 Because the doggone girl is mine

There's just something about a good old-fashioned battle for the heart that draws me
to a song. Maybe it's the drama queen in me, but a little conflict or tug-of-war for love
is a recipe for a hit in my book. How can we forget Brandy and Monica's 1998 chart
topper, "The Boy is Mine," where we found the two ladies vying for the attention from
the same guy. But 16 years before Brandy and Monica vocally duked it out, the King
of Pop
and a former Beatle set the precedent. In fact, both ladies would admit that
their mega-hit was inspired by Michael Jackson and Paul McCartney's "The Girl Is Mine."


When MJ and Paul first
released "The Girl is Mine," elementary school-me swooned at the idea of two "boys"
trying to out-sing each other for my attention. And boy did these guys sing. From the
way that Mike managed to sound both soft and forceful at the same time, to Sir Paul
tapping in to his more soulful side, "The Girl is Mine" epitomized the ultimate love-battle
royale. Everyone else seemed to love it, too, as the first single released from Thriller,
climbed to the #2 spot on the Billboard Hot 100 chart, while also advancing to the top
of R&B Singles chart. So whether or not you loved the conflict or simply just loved
the tune, "The Girl is Mine" will always be one of Michael Jackson's most memorable songs.

Michael Jackson and Paul McCartney: "The Girl Is Mine"