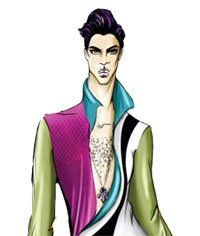 Soon our British and European Bouncers will be amongst the first to get their hands on  Prince's new album 20Ten when he gives it away in various print publications for free. Master at marketing and merchandising that he is, this is yet another smart move by his Purple Badness even in the midst of his baffling stance on the internet being "completely over." Although he won't be making any money from the initial release of this album, trust and believe that Prince stays paid. He still rakes in the dough from catalog sales and his concert tickets, which many don't mind eating a month's worth of ramen noodles to pay for, go for top dollar as they should to see the master at work. Surely there are more ways for the diminutive diva to add more cash to his stash, however. He already stepped his high-heeled foot into the world of fragrance with 3121 perfume, but that ended up in a nasty legal battle with the company who created it. But what if Prince revisited the concept of creating and branding products? If he's open to the idea, I'd like to suggest the following.
Right

Recently on Twitter I casually mentioned that I wanted a Prince doll and a few friends wholeheartedly agreed. Michael Jackson had his chance to be immortalized in anatomically incorrect bendable plastic, why not Prince? He already's like a male My Size Barbie, but I would love to little Prince doll to play with. I would comb his hair, dress him in various blouses and high heels, interchange his guitars, pianos and motorcyles and he'd live in a purple dream house with Barbie, Skipper and Christie. Sorry, Ken, Prince got this.

What is this man's secret to looking so young? The waters of Lake
Minnetonka? Unicorn placenta? Chris Brown's tears? Seriously. I need
answers. I watched him on the BET Awards and even in HD, which is
unforgiving to people's imperfections, this man had nary a wrinkle, age
spot or permed hair out of place. I'm sure that good genes and his strict vegan diet play a part, but
there's got to be more to this story. Whatever it is, he needs to
bottle it up and sell it.

This should come as a no brainer. With the cyclical nature of fashion,
it's about time for ruffles and frilly blouses to make a come back.
Prince could make a killing with his own line of blouses. And Prince wouldn't
need to stop at blouses. If Carlos Santana can have an shoe and handbag
line--a very nice one I might add--then where is Prince's line?
Prince and high heels go together like cookie and milk.

As you can see, I'm full of ideas. I think that Prince needs me on his team to make some things happen. Call me!