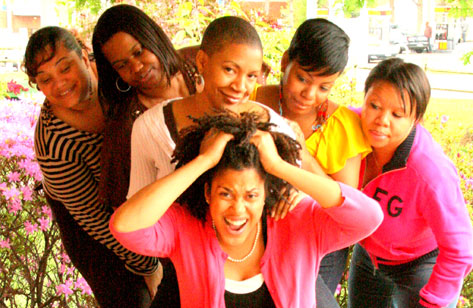 Not to toot our own horns, but we're a talented bunch here at SoulBounce. One of our team members, Moon aka Khadijah Ali-Coleman, is not only a Contributing Editor for the site, but she's an accomplished singer, songwriter, performer and playwright and she has written a new play that will be debuting next week during the prestigious 2010 Capital Fringe Fest in Washington, DC. Running: AMOK centers around three working women who are creative artists compromised by their impending turn as inexperienced mothers. Also in the play are singer/actresses Quineice, Anonamas and Bounce-Worthy vocalists Teisha Marie and Dionne. With so many singers on board, you better believe that there's a soundtrack and it's currently available on Bandcamp in advance of the first show and will be on sale in physical form at the performances. Have a listen to Dionne singing one of the songs, "Something Else," written by Moon and composed by Gary Young below. The production runs from July 20th-25th for five performances only, so be sure to make plans not to miss it when it hits the Goethe-Institut next week. Hit the bounce for all of the showtimes and ticket information.

All performances will be at the Goethe-Institut located at 812 7th Street, NW in Washington, DC as part of the Capital Fringe Fest. Tickets are $15 and may be purchased online, at the fringe box office or by phone. For more information, click here.

Break a leg, Moon! We're proud of you!