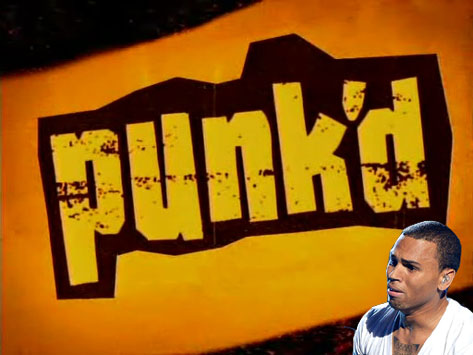 I'm not one to gloat, but, dammit, I love being right. Especially in an instance when people tell me how wrong I am. Such as earlier this week when I questioned the realness of Chris Brown's breakdown while attempting to sing "Man In the Mirror" during his Michael Jackson tribute at the BET Awards and many jumped to his defense. Well, I don't hate to break it to you folks that evidence is mounting that you all have been punk'd. See, Chris Brown isn't such a bad actor after all.
Center

Word is that an anonymous source who was backstage at the BET Awards has spilled the tea to Us Magazine about Brown's spilled tears.

Before he took the stage to belt out "Man in the Mirror," a backstage source tells Us one of Brown's bodyguards gave the singer, 21, tear-inducing eye drops...Says the source, "He rubbed it in and he started crying."

Well, I'll be. So those were, in fact, fake tears? To paraphrase the old adage, what's done in the dark--or backstage--eventually comes to light. This revelation comes days after footage surfaced of a brief interview of Lloyd by Rap-Up TV, during which he was asked to give his reaction to Chris Brown's tribute and stated:

I told him, "Man, you gotta go up there and cry. You gotta really show your heart to the world."

Here's the video for good measure. Lloyd speaks around 3:20.

Stick a fork in me, because I'm done. Lloyd's interview slip up was bad enough, but coupled with the eye drops story, I don't need a third strike to rule this dude out. This evidence may not exactly hold up in a court of law, but in the court of my opinion, Chris Brown is guilty as hell.

In an instance where both BET and Brown could have redeemed themselves--BET for that train wreck of an MJ tribute at their 2009 BET Awards and CB for "The Incident"--this was a miserable fail. Not to say that BET was complicit in perpetrating this fraud, but they did extend the invitation to him to honor MJ so they should have known what they were opening themselves up to.
Unfortunately, the biggest loser in all of this is Michael Jackson. What was supposed to serve as a moment to honor him has turned into The Chris Brown Show. Michael deserved better than that, and that's what angers me the most.