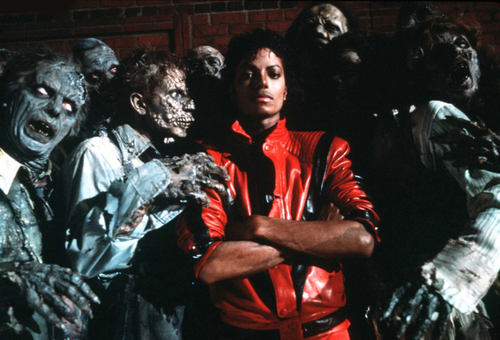 Girl, I can thrill you more
Than any ghoul could ever dare try

To utter the word "Thriller" after Michael Jackson changed all of our worlds completely, meant that we would all irrevocably be overcome with sensations that most of us had never felt before. In 1984, the music video was still a relatively new phenomenon. Despite Michael being the first Black artist to break the color barrier on MTV with his video for "Beat It" and only after intense lobbying, it was he who pushed the very concept of what a song could be. "Thriller" wasn't just a song with an accompanying video and a 45-minute making-of video. "Thriller" was an event. An event complete with cutting edge special effects by acclaimed artists Stan Winston and Rick Baker of American Werewolf In London along with John Landis, the movie's director. Michael wanted the type of horror and comedy blend than Landis delivered in the movie to be present in his landmark video. Needless to say, Michael's vision was realized.

Truth be told, "Thriller" is not only an awesome song with its twisted bass licks and voice over by old Hollywood's King of Horror Vincent Price, it's a video that is absolutely horrifying. Zombies spewing blood, walking darkened streets in search of victims' brains and cornering love interest and recipient of the "Baddest Jheri Curl Ever Conceived" Ola Ray, "Thriller" was disturbing. But like all great works of art, it was the intricacies inherent in the video that kept us riveted: the iconic red and black leather jacket that every man, woman and child just had to have and the Michael Peters-choreographed dance sequence that you were required to learn before school resumed the next day to name just a few. When it premiered, Michael Jackson's "Thriller" was enough to make time stand still and enough to make the entire world pause to watch a former man-child who stole our hearts a decade before scaring and intriguing us in the most amazing way possible.
To this day, I can say with absolute certainty that Michael Jackson is a being the likes of which none of us will ever again experience in any of our lifetimes. Luckliy, "Thriller" is an event which all of us can experience again and again bringing us all closer to exactly how we felt when we first experienced it. The most supreme superlatives will never be able to fully explain just how impressive "Thriller" continues to be.