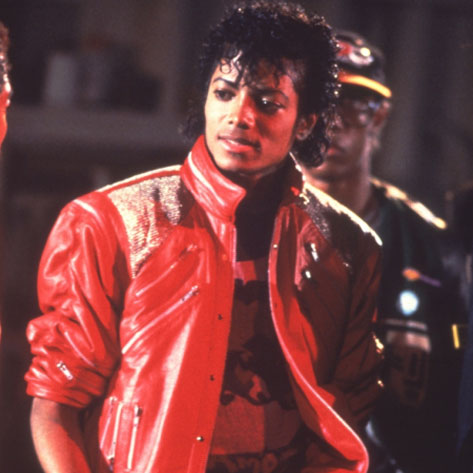 Showin' how funky, strong is your fight
It doesn't matter who's wrong or right

Even though I was all of four years-old when Michael Jackson's "Beat It" was released in 1982, I can remember watching the video for the first time. I remember being enthralled, amazed and frightened all at once. Enthralled by MJ's looks, amazed at the Michael Peters' choreography and frightened by the impending violence of the gang fight.

While Jackson's boyish good looks would changed dramatically over the years, and I eventually realized that the fight-to-be couldn't possibly have been as brutal as it seemed since all it took was a dance to squash to squash the beef, the amazement would remain. Added to that amazement would be a greater appreciation for the near-perfect artistry of the King of Pop.

I mean, who else could have pulled off that iconic red leather jacket? The leather jacket that would be forever connected to the childhood of countless of us '70's and '80's babies. Who else could step away from his soulful, Motown roots by making a quick phone call to rock music demi-god darling Eddie Van Halen to help him tackle the genre successfully, thus cementing his crossover superstar status?

So sure of his vision, Jackson would drop $150,000 on the song's video after CBS refused to finance it. That risk would go on to become one of his most memorable songs and videos. The song's lyrics would reveal a much different Jackson than we were used to. The handsome young man with the feather-light speaking voice was urging us on, encouraging us to fight back and defend ourselves. "You have to show them that you're really not scared," he warned in one line. "They'll kick you, they'll beat you, they'll tell you it's fair," he promised in another.

The Bob Giraldi-directed piece would pick up multiple Grammy, Billboard Video and American Music Awards, in addition to later being inducted into the Music Video Producer's Hall of Fame and certified platinum. Inspired by the Broadway musical West Side Story, Jackson's updated take would showcase the unifying power of dance. Whether or not we truly believed that dance was just that powerful, we allowed ourselves to be pulled into the five minute fantasy-world in which it was the mightiest weapon of all.