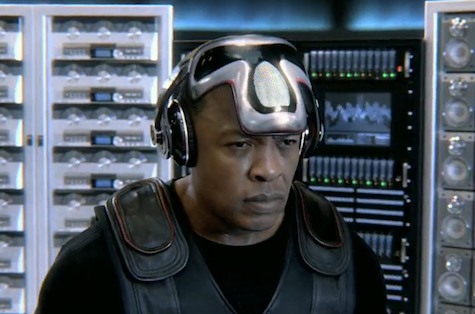 Dr. Dre has been promising to release an album for eons now. Okay, maybe not eons but it certainly seems like it. Love him or hate him, Dre has produced some of the most influential music in the past 20 plus years, whether it be himself, Snoop, Nas, Eminem, or Bilal. I'm not quite sure why he always seems to look so menacing these days, especially with all the money he's made and continues to make hawking futuristic headphones and computers loaded with software he endorses. I imagine when he's not angry he might want to get his sexy on from time to time like the rest of us. "Turn Me On" which may or may not be from his new album and which may or may not be released has surfaced and, much like the title implies, is freaky. As in really freaky. As in put on your headphones. It's definitely NSFW and interesting to say the least. I kind of like it but then again I'm not quite sure. Take a listen below. [H/T:LAW]
Center