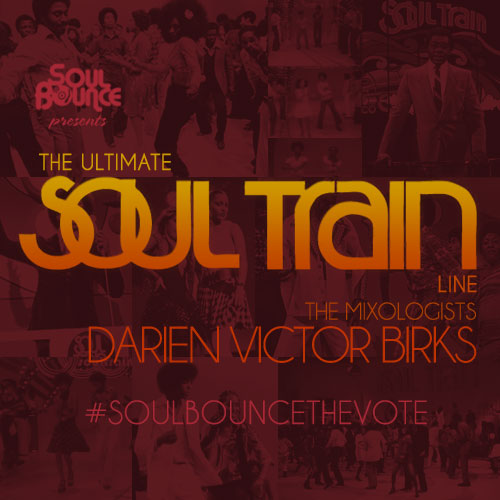 Imagine all of our excitement here at SoulBounce HQ when we discovered we were nominated for a Soul Train Award for Best Soul Site two days ago. Now imagine the panic all of us found ourselves in when we had to come up with ideas to campaign for an award that would be just as much as a victory for us as it would be for you. Since without you, dear readers, we are nothing, we knew we had to pull out all the stops as a thank you for your continued support and also an enticing treat for those of us who are not as familiar with us as they should be--shame on you *wink*. Enter Mixologist Darien Victor Birks, purveyor of Flwrpt and producer of such fine projects such as The Stuyvesants and an excellent mix for this very site. Darien not only came through with 2.4 seconds on the clock in the 4th quarter, but he stuck his foot and whole leg up in "The Ultimate Soul Train Line" mix. Grab your ticket, hop on board, and relive some of the best moments of your life courtesy of artists such as The Jacksons, Shalamar, Stargard, Luther Vandross, Lisa Lisa, Teddy Pendergrass, and other artists who performed on the legendary Soul Train. Lace up your dancing shoes, press play below, check the tracklist after the bounce and, most importantly, vote for Soul Bounce to win Best Soul Site at the 2010 Soul Train Awards. #SoulBounceTheVote

Intro Montage
The O'Jays - Love Train
Gladys Knight & the Pips - Daddy Could Swear
Michael Jackson - We're Almost There
James Brown - You Can Have Watergate
Kool & the Gang - Jungle Boogie
Sly & the Family Stone - If You Want Me To Stay
Aretha Franklin - Rock Steady
Stevie Wonder - Superstition
Mel & Tim - Put An Extra Plus To Your Love
The Trammps - Rubber Band
Gamble & Huff - TSOP
Chic - Dance, Dance, Dance
Teddy Pendergrass - Get Up, Get Down, Get Funky, Get Loose
Shalamar - Take That To The Bank
The Jacksons - Blame It On The Boogie
Stargard - Which Way Is Up
The Sylvers - Boogie Fever
Taste of Honey - Boogie Oogie Oogie
Rick James - Give It To Me Baby
Dazz Band - Let It Whip
Teena Marie - Square Biz
Chaka Khan - I Know You, I Live You
The Gap Band - Outstanding
The Whispers - Up On Soul Train
Luther Vandross - Never Too Much
Loose Ends - Hanging On A String
Lisa Lisa & Cult Jam - I Wonder If I Take You Home
Patrice Rushen - Forget Me Nots
The Jones Girls - Nights Over Egypt
Alicia Myers - I Want To Thank You
Outro (1975 Soul Train Theme)