Further solidifying his place atop Forbes' Richest Dead Celebrity list, music from The King of Pop, Michael Jackson, will live on thanks to a new circus tour based on his life, music and imagination. As a 50/50 partnership between Jackson's estate and Cirque du Soleil, Michael Jackson The Immortal World Tour will hit the road starting in Canada next fall. With a nod of approval from Katherine Jackson, the $57 million tribute show will feature Jackson's hits remixed, mashed up and brought to life by over 60 performance artists. The production will be directed by visionary Jamie King, who's been responsible for Madonna, Britney Spears and Rihanna's recent tours.

While tributes to Jackson may all have good intentions and publicly profess a need to share his memory with the world, one is led to wonder where the line is in terms of profiting on his legacy. Last year, he made more than Madonna, Jay-Z, Lady Gaga and Beyoncé combined with a total of $275 Million. With a movie, book re-release, merchandise and another forthcoming video game, Jackson will be on our screens and in our hearts for many generations to come. Fans hoping to check out the dazzling spectacle under the big top are urged to plan ahead and buy now. Debuting on October 2th, 2011 in Montreal, Quebec, tickets for the show went on pre-sale this week, with prices ranging from $50 to $175 in most cities. Check out the commercial and poster after the bounce and make early plans to see this. 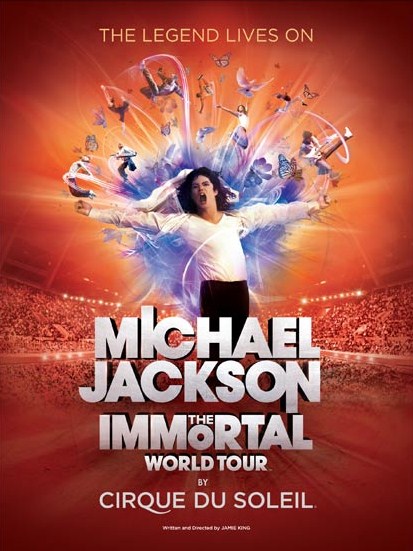