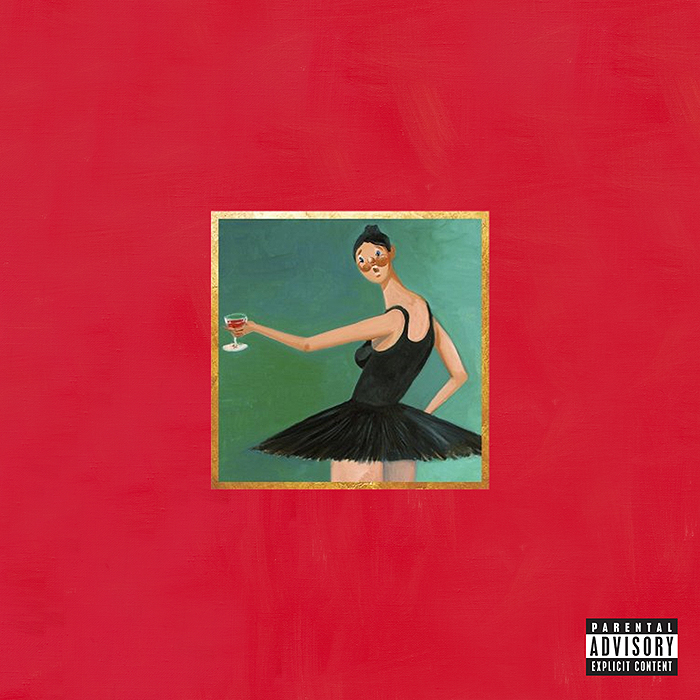 Can you feel it? In the air? No, not the excitement over Thursday's celebration of this nation's impending horrific takeover by ill-meaning and entitled foreigners from those who had been living here for centuries prior. I'm speaking of Kanye's West's magnum opus My Beautiful Dark Twisted Fantasy! Unless you've been under a rock or been swallowed by Kanye's enormous ego or stumbling after being crippled by his numerous egregious public missteps, then you've already heard just how simply awesome this album is. I mean, you have, haven't you?
Center

My joking aside, this review will be no different than all the others that have showered Kanye with accolade upon accolade. Well, yes it will. Here's the thing: it is entirely possible for me to dislike someone's persona based upon how they've presented themselves and completely love their work. You don't think that Mozart or Beethoven were loveable curmudgeons do you? No, I'm not trying to compare Kanye to those great composers, but in their time, they were much the subject of vitriol due to their assholic tendencies. I'm sure there will come a day when we will all look back upon this time and laugh at how much attention we all seem to pay to one man who is on one pole without a doubt one of the best producers of our time and also one of the most troubled, potentially misunderstood figures of this short century. With great talent comes much idiocy as relates to social graces and Kanye is not foreign to this fact.

Upon my first listen to Fantasy, I was relieved to know that the songs that kept me captivated during the 35-minute long short film for "Runaway" were present on the album. I was also happy to know that the majority of the tracks I liked from his "G.O.O.D. Friday" series made the album cut as well. I could totally do without "All of the Lights" featuring Rihanna sounding at best like a winded goat after performing a particularly arduous trek up the side of a mountain, but everything else was instantly liked, by my ears at least.

My absolute favorite tracks have got to be "Blame Game," one of the best tracks I have ever heard about heartache, fragiity and wanting to get completely homicidal towards someone who you wish would just come back just so you can belittle them; "Hell Of A Life" which manages to easily describe to anyone within earshot that rock music and hip hop do exist within the soul music genre; "Lost In The World" whose staccato drums lend an air of impending celebration laced with depression; and "Gorgeous" with Kid Cudi who I have been particularly concerned about and Raekwon who continues to serve as one of hip hop's most consistent wingmen. But then I also love the Gil Scott-Heron mashup "Who Will Survive In America" and "Power," whose video should have been longer than 1:43 in length, and "Devil In A New Dress" with my favorite horribly lyrical, snow-loving cherubim Rick Ross, and damn near every other song this album offers.

I'm not going to compare this album to any other Kanye albums that have come before it. It's pointless really. This album is not about judging it solely for its merit as music. This album exists for us to critique in the great expanse of the world that Kanye has sucked us into. Whether he's apologizing to Taylor Swift or George W. Bush--boo--or he's scaring Matt Lauer into treating him with the respect he feels he deserves on the Today Show, or he's being dissed by Quincy Jones, or he's associating himself with fashion and art's most elitist courtesans or vowing not to say much more then saying too much the very next day, we are all but useless winged creatures trapped in his expansive web. This album, with its varied collaborators such as Elton John, Charlie Wilson, Bon Iver and RZA is meant to place you as part of the action. That is not to say that future generations won't become enamored with this album, because they will. For those of us who are able to exist with this very moment and have the extreme emotions that this one vulnerable and poorly emotionally guarded man can evoke, we are all a part of his fantasy, albeit a dark and beautiful one.