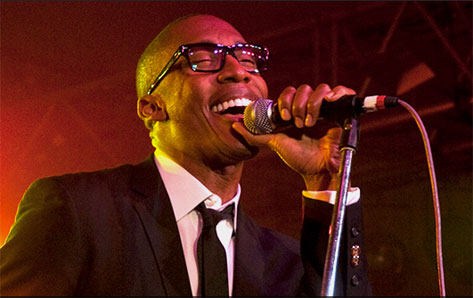 In terms of musical festivals, New Orleans' yearly Jazz & Heritage Festival has long been touted as the city's premiere outdoor event. However, the Voodoo Experience is trying to position itself as the city's next big draw. This past Halloween weekend, thousands got to see for themselves at this year's event. First up, crooner Raphael Saadiq wowed fans on opening night. It was hard to believe that the consummate performer is a day over 40 (he's 44 actually), as he spryly zipped through his show with
more energy and precision than some of today's younger artist. However, if you were
hoping for a taste of his early work with Tony! Toni! Tone!, then you were fresh out of
luck. Save for a rocked-out performance of his hit "You Should Be Here" from his 2002
Instant Vintage album, Saadiq primarily stuck to the Motown-influenced songs off his
2008 release, The Way I See It. From the time he took to the stage, he effortlessly
commanded the audience with such hand-clapping numbers as "100 Yard
Dash," "Staying in Love" and "Let's Take a Walk" (although, sadly, he didn't perform "Big
Easy," a song written about New Orleans' 9th Ward). He also more than made up for the
lack of old material by treating us to new cuts from his upcoming album, Stone Rollin. In
the same old-school vein of The Way I See It, the uptempo grooves made it easy to
dance to, even if you couldn't sing along.
Center 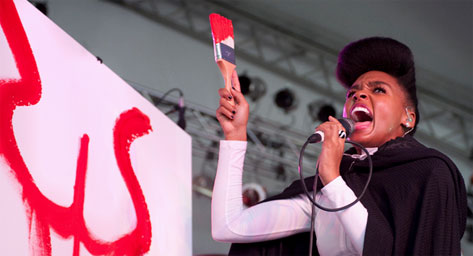 Another festival highlight was Janelle Monáe, who brought her musical theatrics to the
stage, fittingly, on Halloween Day. Costumed festival-goers cheered when she took the
stage, joined by her own costumed, supporting cast of characters. I had been highly
anticipating seeing Ms. Monáe do her thing. See, I'll be the first to admit that I've been
slow to get onboard with this android business. After falling for her voice on the
ultra-fun "Letting Go" from Big Boi's Purple Ribbon All-Stars compilation and, later, on the jazzy
Jaspects' tune, "Peachtree Blues," I was resistant to fall for this sci-fi thing she has going
on, even after all of the critical-acclaim. Though her concert still didn't make me love
The ArchAndroid any more, it did make me a believer in her performance power. The
girl knows how to put on a damn good show. Despite the fact that her show started late
and the audience had to battle with the brutal sun that positioned itself directly behind
the stage the entire duration of her performance, Monáe's dancing feet and undeniable
vocal talent kept most in their places, dancing and grooving along with the petite vocal
powerhouse.

After sweating it out with Monae, I was in desperate need of shelter from the sun.
Thanks to the good folks at State Farm, that respite arrived in the form of its Club 17K
Tent, which included most importantly, shade and cool air. Voodoo-goers ducking into
the tent tried their hand at singing the State Farm jingle for a chance to win either a
custom-screened t-shirt, a free chair massage or food voucher. There were also seats
for the weary to take a load off. After cooling off and refueling, I was ready to head back
out for more of what I came there for--the Voodoo Experience. If you weren't able to
make down to the Crescent City, then have no fear. Fuse will showcase performances,
interviews and behind-the-scenes footage on the special Voodoo Experience 2010 on
Friday, November 5th at 8 pm EST/7 pm CST.