It's undeniable that one of the biggest songs of the year in mainstream R&B--that I can tolerate, at least--is newcomer Miguel's "All I Want Is You." It's a return to that hip hop soul flavor that many such as myself still crave with J. Cole's verses and its winning bass groove. After releasing such a huge song out of the gate, Miguel has no plans on becoming a one-hit wonder when his album, also titled All I Want Is You, drops on November 30th and we get to hear more from him. Audiences are currently experiencing more of Miguel live and direct who is fresh off of his first tour with Mary J. Blige and now on the road with Usher. I got a chance to catch up with Miguel while he was on the road with MJB and we had a frank and entertaining discussion about his music, his background and influences, what we can expect on the debut album and his love of fruit. Not only is he talented but he has a great sense of humor and personality to match as you'll see when you watch him in the latest episode of The Bounce below. 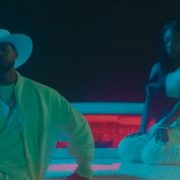