Committed Has Us Tuning In To ‘The Sing-Off’ 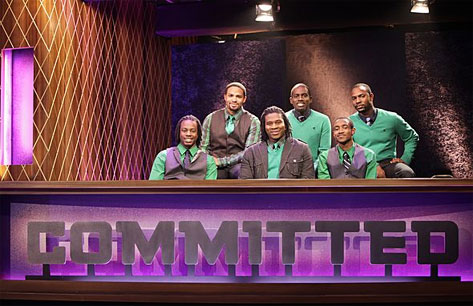 Last Monday night after hearing my tweeps rant and rave in my timeline about some of the performances on The Sing-Off, the a cappella group singing competition series, I decided to tear myself away from a rerun of the Ratchet Housewives of Atlanta to check it out. I tuned in right in time to catch the tail end of the group Committed performing Maroon 5's "This Love." In a word: OMG.

OK, maybe that's technically three words, but this group of six young men from Huntsville, Alabama who typically sing gospel music had me catching the holy ghost in my living room with their soul-sonic version of the chart-topping pop song that brought to mind both Take 6 and Boyz II Men. I wasn't the only one catching feelings, as judge and BIIM member Shawn Stockman could hardly contain his love for these cats during his post-performance review. I'm sure that he heard himself, Nate, Mike and Wanya when Committed opened their mouths, and how could he not because just like Boyz II Men their sound is on point, their harmonies are tight and they are most handsome in their coordinating outfits.

Check out this video to hear a snippet of Committed singing One Republic's "Apologize" from the second episode of the blink-and-you-might-miss-it five-night-long series that runs again tonight and Wednesday, December 15th to see if they make it to The Sing-Off finale on Monday, December 20th. Even if Committed doesn't win, with the lack of new R&B and soul groups that can sing, I'm positive that we'll be hearing more from these dudes in the future.


TAGS:  boyz II men, committed, shawn stockman, take 6, the sing off
Previous: ‘A Very BET Christmas’ Was Very Good Next: Morning Soul: I’m Not Too Busy For You