Kanye West Spends ‘Christmas In Harlem’ With A Few Friends 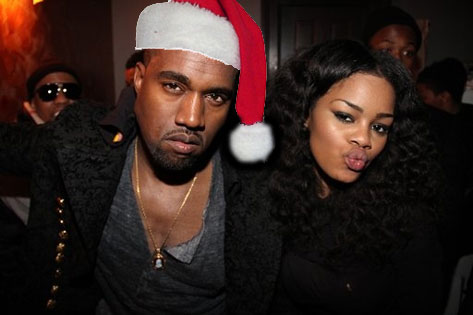 Add Kanye West to the list of artists who spread Christmas cheer via
holiday music. Two weeks after his last G.O.O.D. Friday release, Mr.
West dropped "Christmas In Harlem" with the help of a gang of New York
rappers and Harlem representer Teyana Taylor. The playful track
features Cam'ron, CyHi da Prynce, Jim Jones, Vado, Pusha T and Big Sean
trading verses over a light, piano-driven melody. Per Kanye, Musiq
Soulchild
is on the song, but I can't discern his vocals from the
others. And what would a rapper's Christmas song be without cocaine/snow metaphors? Nice work Pusha T and Cam. Teyana, the singing socialite, known more from her amazing body
appearances on urban blogs than for her music, gets to shine here. The
former Star Trak signee can actually sing. Kanye has apparently taken
notice, as she sang on the opening track of his new album, "Dark Fantasy." In the
interest of remaining positive and being constructive and all that
jazz, I'll refrain from going in on Cam's elementary wordplay. I will
not expound on my surprise that people take him seriously and he continues to release music. I will not go there. Tis the season and stuff, right? Please excuse the radio rip and annoying Funkmaster Flex bombs in this version.
Center