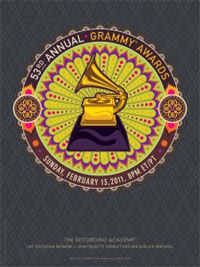 Wednesday night the nominees for the 53rd Annual GRAMMY Awards were announced and the usual suspects (Eminem, Jay-Z) racked up a ton of nominations while there were some pleasant surprises (Janelle Monáe, Cee-Lo Green) and a few head-scratchers (Erykah Badu, YahZarah). We won't know the outcome until the GRAMMY Awards happen on Sunday, February 13, 2011, but SoulBounce is very excited to see so many soul and hip hop artists who we love and cover on a regular basis nominated in the R&B and Rap categories and even snagging a few nominations for the major awards of the night. Congratulations are also in order for Beyoncé, Michael Jackson and Sade who are nominated in Pop categories for Best Female, Male and Duo or Group, respectively, and for our girl Lalah Hathaway who is nominated with Kirk Whalum for Best Gospel Performance. For a closer look at the major, R&B and Rap categories and my projections about each award, hit the bounce.
Right

Album of the Year

SoulBounce says: I have not listened to any of these albums, so this is anybody's category to win. However, if I were to guess, I'll say that a Caucasian artist is going to take this award home.

Record of the Year

SoulBounce says: This category is like WHOA. Never before in GRAMMY history have four urban songs been nominated for Record of the Year. This is a major accomplishment, but my fear is that the vote will be split or people will go with the safe choice. The New Yorker in me wants "Empire State of Mind" to win, the SoulBouncer in me wants "F--k You" to come out victorious and the realist in me knows that the country song will probably come out on top.

SoulBounce says: Two words: Bie. Ber. If Justin doesn't win this award, I'll be shocked and awed and riots will surely break out at elementary schools across the country the next day. I'm still racking my brain about Esperanza Spalding's nomination for Best New Artist with Chamber Music Society being her THIRD album, but this gives me hope that Janelle Monáe will get nominated in this category in 2013.

Song of the Year

SoulBounce says: I haven't heard all of these songs yet, but even if I had my vote would still go to Cee-Lo's decadently rude "F--k You." The song is pure, unadulterated genius. End of discussion.

SoulBounce says: Well, I surely missed the mark with my predictions for this category. I only got one song right and half a point for accurately guessing that Monica would be nominated. These songs are all solid contenders, but I'm still baffled that Alicia Keys' "Unthinkable" and Erykah Badu's "Window Seat" were omitted. Could their controversies (creeping with a married man and stripping down naked in public on video, respectively) have cost them nominations? Possibly, but then Fantasia was nominated and she's had more drama than those two combined this year--which oddly enough will make her the winner in this category I believe.

SoulBounce says: Now this is a very good category with worthy nominees across the board. My predictions were pretty on point, with just two exceptions. Although I knew for sure that Eric Benét would snag a nomination, apparently "Sometimes I Cry" wasn't released during the eligibility period. That's cool because now I can put my all into rooting for El DeBarge who is super-deserving of this award. Whether he wins, will be another matter, though. Usher had a huge year and Academy voters may deem him the safe choice.

SoulBounce says: This is a category that I guessed all wrong, which is a pity because there were some damn good songs that were overlooked. I love Sade, but being a DMV resident for the past 20 years, I have to go with the hometown hero Chuck Brown in this category. But I'll be happy when Sade wins, because I totally see that happening. This category also screams the fact that we need more good R&B groups. Badly.

SoulBounce says: Two songs that I thought would make it into this category did make the cut, and I actually think that R. Kelly may just find himself a winner. John Legend & The Roots could prove some serious competition, though.

SoulBounce says: This category could very well be named the Best SoulBounce Approved Performance because we've talked about all of these artists nominated for Best Urban/Alternative Performance this year. I got three out of the five songs right with my predictions, and although I'm sick that YahZarah didn't get nominated, I'm so happy to see Eric Roberson's name listed here for the second year in a row. I'd be ecstatic if Erro, Cee-Lo or Janelle took this trophy home.

SoulBounce says: Here again, another category with an excellent list of nominees--although I guessed none of them correctly. However, from a songwriting standpoint, these are all extremely worthy songs. So much so that I can't pick a favorite or even a clear winner. This is one award that I wouldn't be mad at the outcome regardless of what it is.

SoulBounce says: This is another R&B category with a strong list of contenders. I would love to see Jaheim win because his album was superb, but I think that John Legend & The Roots got this.

SoulBounce says: My heart wants Janelle Monáe to win, but my head thinks that Usher will.

SoulBounce says: It's ludicrous that Ludacris' "How Low" is nominated, but he's not going to win anyway, so whatever. This will be a showdown between Eminem and Kanye, and I think that the former will win yet another GRAMMY. Although I would love to see our favorite eccentric hot head bring it home, which would be quite deserving for Mr. West.

SoulBounce says: On all that is good and holy can someone explain to be how Jeezy and Plies' "Lose My Mind" got a nomination. Go ahead, I'll wait. In the meantime, I'm going to put my money on Jigga and Swizzy to win, but I would love so see Big Boi and Cutty snag this one. "Shutterbugg" went hard in the paint this year. The most glaring omission in this category (and others under the Rap umbrella) is Rick Ross not getting any nomination love for "B.M.F." with Styles P.

SoulBounce says: Now these are some contenders. This is one of the best match-ups in this category that I've seen in a while, with all of these songs worthy nominees. However, I think that this is a three-way race between "Nothin' On You," "Love The Way You Lie" and "Empire State Of Mind." Who will win? Em and Rihannagoat. Who should win? Jay and Mrs. Beatz.

SoulBounce says: Another strong category with very few surprises. If we're really talking best here, then "Empire State Of Mind" needs to win, hands down. But I would not be surprised if Eminem took the prize because, well, he's Eminem. On the low, though, I wouldn't be mad if cuties on duty B.o.B and Bruno Mars won it either.

SoulBounce says: In a perfect world, The Roots--who are so deserving not just for this album but for their past body of work--would win Best Rap Album. However, I think that this is Eminem's year.

So that's my take on the 53rd Annual GRAMMY Awards nominees, but I want to hear what you have to say, SoulBouncers. Did your favorite artists, songs or albums get recognized this year, or do you want to flip over a table Incredible Hulk style at any perceived snubs? Have your say in the comments section, and be sure to bounce with SoulBounce, your GRAMMY.com R&B Community Bloggers, all the way to the 53rd Annual GRAMMY Awards on Sunday, February 13, 2011!