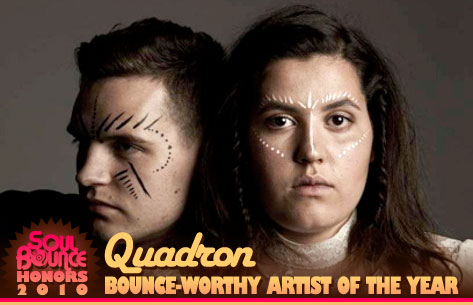 It's safe to say that 2010 has been a stellar one in terms of new music. We have had some big-name comebacks, reaffirmations of genius and some new and exciting artists have emerged, which should provide ammunition for sites like this for the forseeable future. One such act who can definitely be called "new and exciting" are Danish duo Quadron. Their self-titled debut dropped back in the second half of 2009, but 2010 has been their year for gaining momentum and making a big impact on the scene, gaining support from tastemakers, bloggers, fellow artists and the music-buying public.

The duo consists of multi-instrumentalist/producer Robin Hannibal and vocalist Coco O. (aka Coco Maja Hastrup Karshøj) who met while performing as part of the Danish music collective known as the Boom Clap Bachelors. BCB's output borrows from a number of genres and is performed in their native Danish, but Robin and Coco discovered that they shared a particular affinity for soul-based music and so formed Quadron (their name derives from the fact that both artists are a quarter African/African-American) whose songs are sung predominantly in English.

Quadron describe their style as experimental, electronic soul, but ask anyone who is familiar with their music and they'll tell you it's a whole lot more than than that. Robin's lush, deceptively complex production coupled with Coco's mesmerising vocals allow the duo to take on just about anything, from the Motown-esque vibes of tracks such as "Pressure" and "Slippin," the almost ethereal jazz of "Day," to funky grooves such as "Average Fruit," the duo have seemingly created their own mini sub-genre, to the delight of those looking for something a little different yet comfortably familiar.

2010 has seen them on their grind releasing a steady stream of videos in support of tracks such as "Slippin," "Average Fruit," and "Simili Life" as well as a host of remixes and embarking on a US tour, which saw them perform alongside big names such as label-mate Bilal and J*DaVeY. However, what really had people talking was their take on Michael Jackson's "Baby Be Mine" during the summer. The previous 12 months had seen numerous MJ tributes--some good, some not so--but their sympathetic rendering turned the mid-tempo groover into a gorgeous, delicate love song with an equally beautiful video accompaniment featuring footage of Michael that won over even the most sceptical doubters.

With a new album in the works and both members working on side projects, next year will be an exciting one for Quadron fans. So let the bestowing of this honor on them as Bounce-Worthy Artist of the Year be a celebration of what has come before and a reminder to those who are late to the party to keep their eyes and ears trained on Quadron.