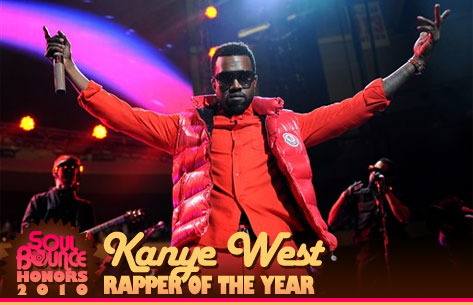 If 2009 was the year of Kanye West's fall from grace, 2010 was the year he clawed, wrangled
and forced his way back on top. After his 2009 VMA-Taylor Swift fiasco, it seemed that the
public had finally silenced the overly-confident, wild-child spirit of Mr. West. Starting the year
off on a quiet note, we all wondered what the future held for Chi-town's lonely, only child. The
rumor mill reported that he had retreated to Hawaii, where he was working on the follow-up to
2008's 808s and Heartbreaks. Would it be the same type of emo-electro-Auto-Tuned mash-up
that appeared on 808s? Would he even still have what it takes? Would this be the year that
Kanye West failed?
Center


By May 2010, Yeezy began of the process of telling the doubters to kick rocks when his
rumored lead single, "Power," leaked to the net. The buzz was instantaneous. After a brief
excursion into Auto-Tuned crooning and that disastrous date with the Henny bottle at the VMAs
left him out in the cold with fans, it seemed that Kanye's return to a hot 16 was quickly warming
us up. From the song's opening bars, it was evident that his time away had done little to restrain
his outspoken cockiness. By the second verse, he was taking on Saturday Night Live in
the good, ol'-fashioned Kanye over-the-top way that we had come to expect. Just a few lines
into the third, he was pretty much just telling us that he knew that at the end of the day we
were "feeling this shit."

And my, how we were.

By the time we got to the November 22nd release date of My Beautiful Dark Twisted Fantasy, we
were damned near beside ourselves with anticipation. Of course, this is after he spent the
better part of August, September and October teasing us with his brilliantly-planned G.O.O.D.
Fridays leaks, which included tracks featuring the likes of Jay-Z, Nicki Minaj, Mos Def, Rick
Ross, Keri Hilson, Lupe Fiasco, Justin Bieber, Raekwon and many more music notables. Nearly
every Friday for over three months, he held our attention, as we waited for a fix of that week's new musical crack. The one thing that stood out the most about West at this time
is that even with such star power surrounding him, it was his lyrics that impressed us most. At
once introspective, presumptuous and down-right funny, this Kanye was at the top of his game
and he was more than aware of it.

Now this isn't to say that he still doesn't stumble on the road to ridiculous self-love from time
to time. Let's not forget his Today Show blowout with Matt Lauer or his questionable
Macy's Thanksgiving Day Parade performance. But such social faux pas seem like small
change when held against the tight lyricism, production and self-marketing schemes cooked up
by the College Dropout in 2010. In true Kanye form, his creativity both alienated and intrigued
us at the same time. Regardless of what you thought about his 35-minute beautifully artsy-fartsy
long-form "Runaway" video or his Twitter rants, it was hard to escape the reach of such album
standouts as "Power," "Monster," "Blame Game" and the "Runaway" song.

In spite of all the ridiculousness that being Kanye West seems to entail, above all else, it seems
that being Yeezy also includes being one of the most electrifying things to happen to hip hop in
2010. So as we enter into the year 2011, let's have a toast to all the douchebags, assholes and
jerk-offs in the name of our Rapper of the Year, Kanye Omari West.