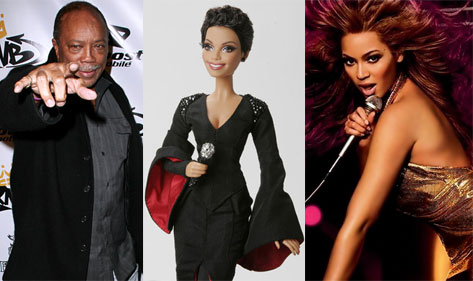 In the spirit of staying true to my astrological moniker Moon, I have decided to come up with ten predictions for the upcoming year. While this list was very challenging to compile, being that there are so many possibilities to wade through given the multitude of OMG, WTF and FAIL moments of 2010 (stay tuned for "Top Ten WTF Moments in 2010"), I don't suggest you try this at home or take it too seriously. As I would imagine Miss Cleo to say before she was sued--this is for entertainment purposes only. In other words, it's just for kicks and giggles, folks. In fact, please share your own predictions in the comments section after reading my predictions after the bounce.
Center

First, there was the "We Are the World" remake this year that was released after the devastating earthquake in Haiti. We shared with you how we felt, but we still didn't cast Quincy Jones off just yet, I mean, the song was done for a good cause. Plus, he is a legend. But there was no subsequent cause that called for the debacle that soon followed. After defiling Michael Jackson's "P.Y.T." and the classic "Secret Garden," Quincy Jones has led me to beg that he not come within 50 feet of a studio to remake anymore classics in the near future, at least with the intent to release to the public.

2. Keri Hilson and Nicki Minaj appear on Dancing with the Stars to challenge Lil Kim

The Lil Kim vs. Nicki Minaj battle came and went with little fanfare, but I predict that with Keri Hilson's new over-sexualized persona coming to a magazine stand near you, the battle will now heat up as Keri will soon announce her intention to jump on the Dancing with the Stars bandwagon and Nicki Minaj will soon follow suit with the intent to shake Lil Kim's record of being the only surgically enhanced rapper to appear thus far on the show. With Keri Hilson and Nicki Minaj closing in, Lil Kim will be forced to push the envelope and *gasp* reinvent herself, thus removing the implants, shaving her head, finding Jesus and doing another reality dating show, Countdown to Love Lockdown.

3. Janet Jackson gives up her acting career and gets into the toy business

Thoroughly convinced that our recent post about the  16 Janet Jackson Barbie dolls that we'd like to see was peeped by Janet Jackson herself, I predict that she will soon dismiss all notions of doing yet another Tyler Perry movie and will, instead, devote her time and money to operating her own toy business, selling doll replicas of herself with matching accessories. This business venture, which Team SoulBounce is more than happy to consult with her on, will be an instant and long-lasting hit with her fans, 8 to 80.

4. T-Pain will usher in the new wave of performing robots to replace Auto-Tune

When we shared last month that new technology had emerged to create robots that appear human, it wasn't hard to predict that this technology would fall into the wrong hands. T-Pain was the first violator to come to mind, given that I blame him for the commonplace use of Auto-Tune today that continues to assault our airwaves--now by people who can actually sing. Can't you just see this now, robots on stage singing Auto-Tuned versions of the songs by artists they are created to look like?

After long last, I predict that Babyface has heard our cries and 2011 will lead Toni Braxton, Mary J. Blige and Faith Evans back into his genius fold where he has crafted ballads and up-tempo tunes to suit the textured and mature sounds of their voices, pulling them out of the synthesized quicksand of pop that they had been sinking into. The ladies will reemerge as the soul divas that they are and show the masses once again what real singing is all about.

Beyoncé
's current retirement that consisted of making videos with Lady Gaga, debuting a new fragrance and launching a temporary tattoo line will be usurped, I predict, with her new interest in storming all areas of entertainment that remain untouched by her presence. Stay tuned for B to show up on Broadway in the new musical Destiny's Child: A One-Woman Show, because, well, it was one. This production will be financed by hubby Jay-Z and the Illuminati.

7. Robin Thicke grows his hair back and experiments with reggae

Robin Thicke struggled with reinventing himself this year. So, I predict that 2011 will lend him some clarity and he will finally let go of the outdated "sex-me-up" tunes for a different sound and look. Drawing from his earlier career image where he looked like a cross between white Jesus and Jeff Spicoli, Sean Penn's character in Fast Times in Ridgemont High, Thicke will grow his hair back, locking it this time around, and experiment with some Bob Marley-esque tunes with edge.

This prediction is for near the end of 2011 when Janelle Monáe is riding on top of the world after sweeping through every award show with wins and winding down her sold-out world tour. In one televised performance on the resurrected Arsenio Hall show that will debut next fall, in mid-dance she will notice a ungainly middle-aged person dressed in youthful attire jump on stage, lunging toward the mic. Frightened and in surprise, she will recognize the culprit as her label owner Sean "Diddy" Combs, and without further ado, will disown him on the spot, taking her Wondaland entourage with her, leaving him with only the memory of the best android he ever had in his life besides Cassie.

This title pretty much says it all. I just can't wait to hear his campaign slogan.

After capitalizing off of every aspect of his life--from his music, to his clothes, image and concert footage--Sony Entertainment will announce in 2011 that they will be opening up an interactive Michael Jackson theme park at Neverland Ranch. The park, which will rival the theme parks created in honor of Elvis Presley and Dolly Parton, will boast space coasters modeled after the vehicle in the video "Scream" and will have a safari petting zoo on its premises where visitors will be able to meet the grandchildren of Michael Jackson's former pet monkey Bubbles. Copies of Michael, Jackson's recently-released posthumous album, will be given out as souvenir coasters.

So these are my soulful predictions for the new year, what do you think 2011 has in store?