Janet Jackson To Get ‘Up Close And Personal’ On Tour 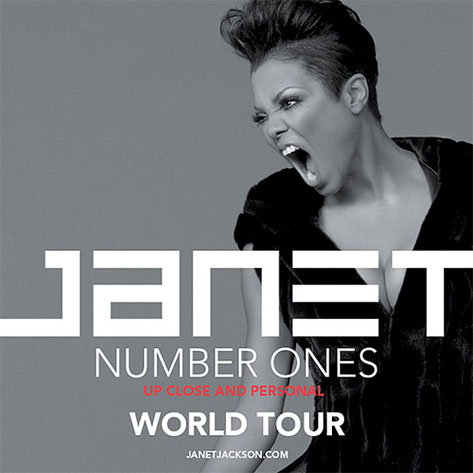 Say what you will about her recent music, but few people living today can put on a show like Janet Damita Jo Jackson. From stellar, innovative choreography to theatrics and nostalgia, witnessing a Janet show is almost an outer body experience for me some. However, as a fan, I can admit that this isn't 1995, and she is no longer on top of the world, sales-wise. While the past decade may not have been her best commercially, a few missteps have not shaken her ability to wow audiences and inspire her subordinates--yes, subordinates--as evidenced by the rave reviews after her headlining performance at last years Essence Music Festival. Ater a widely publicized haircut, the American Idol performance, and stunning private concert for a global investment firm last fall at Radio City Music Hall, a newly slim and more confident Janet has announced dates for her "Number Ones, Up Close and Personal World Tour," celebrating 35 number one records. Yes, 35.
Center

In the wake of that performance at Radio City, she mentioned the difference in the crowd's energy in a smaller venue and said that she appreciated being able to actually see fans' faces and interact with them more. As a result, this time Janet's going the intimate route. Think: fewer stadiums, domes, and arenas and more halls and theaters. Even I can concede that sales may have a hand in this decision, but that won't stop me from supporting Saint Damita Jo. Judge me not, but I saw her "Rock With U Tour" three times. Yes, it was that good.

This greatest hits celebration will feature her performing only those songs featured on her recent Number Ones album, so casual fans will at least recognize all of the songs. The singer will dedicate one song from the album to each city of the 35-date tour. The first song dedication released so far is "If," fittingly, dedicated to the fans and city of Hong Kong, the second date of the tour. I can't forecast how many show's I'll attend, but if the last tour was any indicator, we are in for a hell of a treat.
Here are the North American dates for the "Number Ones, Up Close and Personal World Tour":

TAGS:  janet jackson
Previous: We’ll Pass On Kanye West & Jay-Z’s Slice Of ‘H.A.M.’ Next: Get In ‘Step’ With Little Dragon