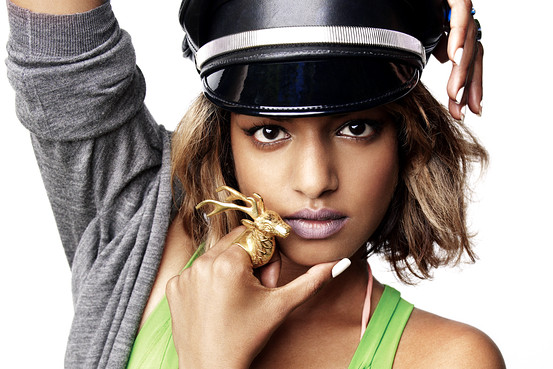 It's pretty hard to describe London-born performer/controversy-junkie M.I.A. She sings. She raps. She pisses
off the media
. She rants, raves, and does pretty much whatever she wants
in her music, wardrobe, and otherwise. It matters not whether we
understand, like, or even buy her product. She exists in her own lane and
universe, where petty things like rhyme patterns are irrelevant. On the
heels of her latest commercially underwhelming, critical bomb /\/\/\Y/\,
Madame Jibberish has released a 36-minute mix, Vicki
Leekx
, inspired by headlines surrounding the controversial website WikiLeaks. I won't pretend to appreciate all of M.I.A.'s musical offerings, but this, I actually enjoyed.

The free set features a few new tracks as well as tunes axed from her album, some of which she leaked over the course of the past year. There's production by Danjahands, Munchi, Diplo, Blaqstarr, Switch, Rusko, VIIXIIV, So Japan, and even M.I.A. herself. Because I don't indulge in mind-altering substances, I also can't pretend to follow all of what goes on here, but there are some definite standouts in the bunch. There's something for everyone, really. There are tribal moments ("Tamil Beat Munchi," which samples a line from Nicki Minaj). There are house moments ("Mudersounds Munchi," which finds her rapping over a chopped-up Baltimore Club beat). She's also got some reggae vibes and traditionally structured, potentially more "accessible" tracks like "Bad Girls," presumably by Danjahands. Good stuff overall.

At the core, I believe this young lady would like to be known as a
rebel, a whistle-blower, a truth-teller in a world of unquestioning,
trend-following pop tarts. She's the girl that wears non-matching
clothes but secretly wants you to like and accept her. Hell, she "sings"
of being "born free" and laments the ills of society, then strikes back
when her music and persona are attacked. She fashions herself one of
the little people, but married the heir to a multi-billion dollar fortune, and so on.

Upon giving the whole mix a spin, it appears Miss Arulpragasam has joined a new trend in music by producing a free mixtape that is actually more enjoyable than a mastered, planned, and marketed album (see: "Anticipation" by Trey Songz and "Stray Bullets" by Cee-Lo). Overlooking the moments where lyrics are completely unintelligible or unapolagetically elementary ("You my love/You my love/You my, you my love"), this collection is definitely groove-worthy. The chaotic, wild, often frenetic production generally works, adding to her indie, "weird" appeal. It could all just as easily be dismissed as yet another collection of nonsensical faux-political rhythmic rants. However, acknowledging the contradiction-filled cloud she's smoked herself into,
it's much more enjoyable to drop the machete, climb down the flag pole,
look past the trendy, mass-produced Che Guevara posters and experience
the music at face value, enjoying the sound versus feeding into her
"message." Get into one of the standouts from Vicki Leekz, "Tamil Beat Munchi," and be sure to peep the tracklisting on the image below. 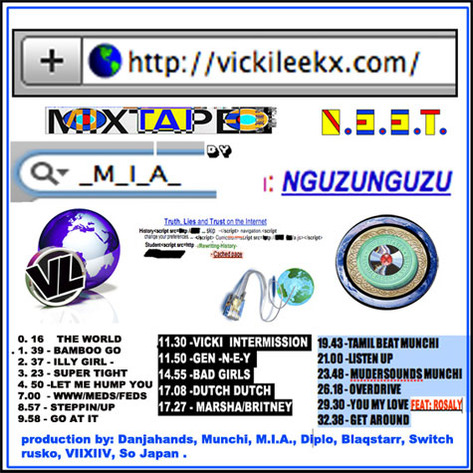