Keri Hilson Cleans Up Her Act On David Letterman 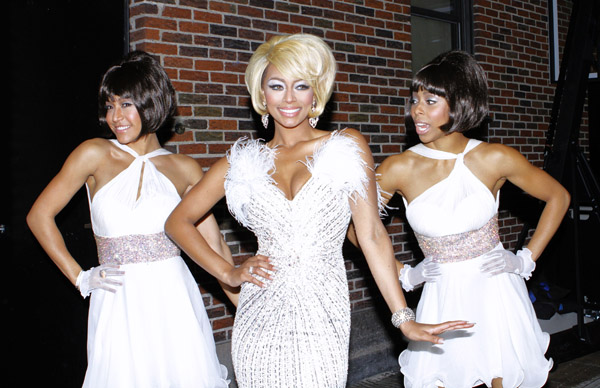 Oh, Keri Hilson. She makes it so hard for me to like her. I loved her first album, In A Perfect World and all of her work with Britney Spears on Blackout when she was...ahem...on death watch and such. Her skill as a songwriter is not disputed. She can definitely pen a hit. However, the Misguided Career Barbie schtick has run its course. Jumping from a well-intentioned self-declared girl power anthem in "Pretty Girl Rock" to crotch-advertising handstands and singing screaming "F--k me! F--k me! It's the way you f--k me!" in "The Way You Love Me" don't exactly give the impression that any of this is actually thought-out. Nevermind that an album named No Boys Allowed has six male features. Is she trying to tell us something? I doubt even she knows. In general, I make it a rule not to take serious any adult who uses "hater" (especially in music) nonjokingly.

This week she stopped by Late Show with Dave Letterman for a Motown-inspired performance of the love letter to herself, channeling Beyoncé as Deena Jones Diana Ross & The Supremes, with the requisite hair, makeup, and literal choreography. Overall it was more enjoyable than some of her other live showings, where shaky vocals tend to prevail. Call it a double standard, but her cocky disposition without having achieved and/or sustained any sort of artistic greatness has rendered her fairly unlikeable. I have yet to hear anyone in an interview say, "You know what? I just really, really admire Keri Hilson. I love what she's doing, and I strive to be like her someday." But, if you don't believe in yourself, nobody else should or will. Right, Ciara? I must give credit, though, as "Pretty Girl Rock" is catchier than the "Decent-Looking Girl Shuffle." While she surely is pretty, I can guarantee that nobody hates her because she's beautiful.