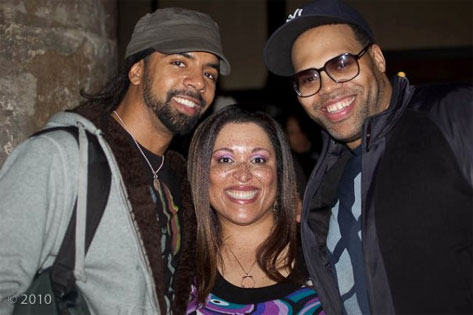 For me to string the words tune, in, to, and BET together in a sentence, you know that it must be a special occasion. Well, make that two special occasions, because this week two of our SoulBounce faves will make the jump from our iPods into your living rooms when Eric Roberson is a guest on The Mo'Nique Show tonight, Monday, January 31st, and Darien performs on 106th & Park on Tuesday, February 1st. That's right folks, the underground is going nationwide, and although it's not quite prime time, this is a major look for both artists.
Center

With his second GRAMMY nomination in hand, Erro was a no-brainer to appear on Mo'Nique's late-night chat fest. As much as I am not a fan of her show, I do have to give Mo props as being one of the only places where independent acts can be seen on television, which is a wonderful thing in and off itself. Eric is one of the few independent artists who gets played on the radio in certain markets, but this appearance on Mo'Nique's stage will aid in introducing him to an even wider audience.

As for Darien, his scheduled appearance on teen-centric 106th & Park may come as a shock, but if it exposes those youngsters to an artist who can actually sing without the aid of Auto-Tune or the latest (tired) producer-du-jour, then I'm all for it. Darien is scheduled to perform one song with a live band, and having seen him in concert before I can attest to the fact that he puts on an electrifying show. I don't know if he'll have time to break out with any dance moves or kick a few verses on the rap tip, but Darien does it all and does it all very well. Thankfully with his victory in the Budweiser Superfest Battle for the Crown, there will be many performances for Darien in the year ahead and more opportunities to see him live.

Synchronize your watches, schedule the alarms on your phones, and set your DVRs to see Eric Roberson on The Mo'Nique Show tonight at 11 pm EST/10 pm CST and Darien on 106th & Park on Tuesday, February 1st at 6 pm EST/5 pm CST.