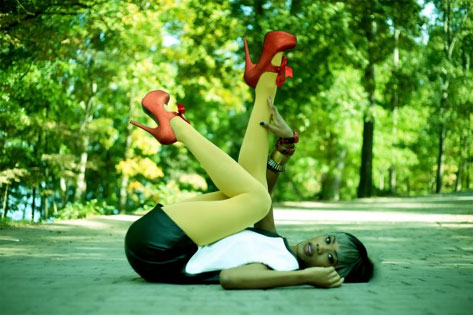 It's been quite a while since fans of Algebra Blessett have been blessed with new music from the Atlanta-based singer. Last fall, she reluctantly released a solid cover of Nina Simone's "Don't Let Me Be Misunderstood." Aside from that, lovers of her dynamic voice had to hold themselves over with 2008's Purpose, unless you were lucky enough to spot her on the concert stage. India.Arie comparisons be damned, Algebra is hard at work on her second album, and has been selling the EP Dessert Before Dinner at live shows. Giving a taste of what we can expect in the future, "I Ain't No Joke" has surfaced, lending her melodious voice to a soulful sample of Eric B. & Rakim's classic of the same name. Well, it's not exactly groundbreaking. It feels like a mixtape track, as it doesn't really explore any new territories, vocally. It's...cute, at best. Take a listen and see if this whets your appetite for more from Algebra. [H/T: BLS]
Center