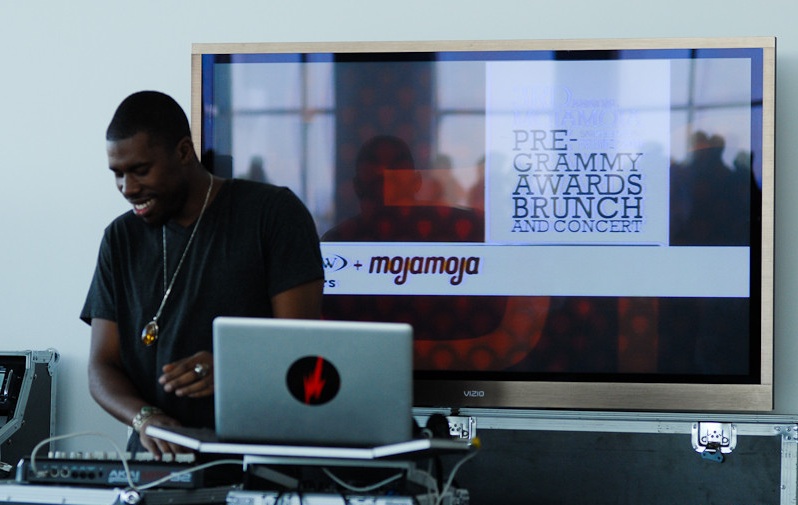 Just (five) hours after dancing up a storm alongside SoulBounce's ill Mami and Butta at Kiss-n-Grind Friday night, I got the call to cover the 3rd Annual Moja Moja Pre-GRAMMY Brunch and Concert. I didn't know what to expect but was, thankfully, pleasantly surprised. After partaking in some pre-event champagne, because it is never too early for bubbly, I chatted briefly with the event's host, KCRW's DJ Garth Trinidad about the importance of exposing listeners to a diverse musical lineup. He said that selecting music to play is an extension of one's personality, so it's important to present an eclectic mix of local and international sounds. The legendary Flying Lotus (pictured above) provided the soundtrack during brunch, where I shook hands and sipped with familiar faces, including Def Sound and people who'd seen me sweating my perm out at Kiss-n-Grind the night before.
Center

After a lengthy pause for seating, Superhumanoids took the stage. They're a generally awesome LA-based "dreamy pop"/indie rock outfit whose atmospheric and ethereal sound set the tone for the day's energy level. I hadn't heard of them, but vocalist Sarah's soaring voice won me over instantly. I didn't expect them to be as funky and, again, friggin' awesome. Standout track: "Hey Big Bang," which they dedicated to FlyLo. The crowd was officially warmed up.

All the way from Santiago, Chile came first-time GRAMMY nominee Ana Tijoux. Despite some initial sound difficulties, the rapper bopped through an energetic performance of songs in support of her latest album 1977. Ana was undeniably charming, cracking jokes with the audience between songs, captivating the reserved, tame crowd. Her title track, "1977" began with the intense lyricist spitting over sparse guitars. Then the beat dropped. Heads nodded. Hips swayed. Fists were raised. We were hers. Language barrier aside, she surely gained dozens of fans that day, because soul is soul and dope is universal. The crowd was now awake.

And then Bilal took the stage. Although Garth Trinidad introduced him as the man whose voice is "a gift from God," although he was received with thunderous applause, although he declared "I'm gonna entertain you motherf*ckers!"...he did no such thing. Yes, he arrived on time. Yes, he was vocally solid with his strong falsetto and Prince-like baritone on display. Yes, he remembered all the words. However, the crowd was noticeably subdued during his set. We responded quite differently to him than the way we did to the previous performers. I'm sure if the venue were a smoky, intimate club, the vibe would've been different, but he was singing at us. His super brief set felt disjointed, and it appeared as if he'd rather be anywhere else in the world but on stage at that very moment. It felt...obligatory, if you will. A returned favor, perhaps? Though it was my first time seeing him live, I've loved his music since 2001's "When Will You Call?". His voice was dope but something was off. This guy here was not impressed at all.

The event doubled as a benefit Oxfam America, a Haiti relief organization. A chairman presented the event's honoree, Mavis Staples of the famed Staples Singers, with the inaugural Vanguard Award. She then took us to church with a rousing performance of her group's hit, "I'll Take You There." Her voice is just as powerful now as it was 40 years ago. Everyone was on their feet, two-stepping, clapping, and singing along. Shout out to the overly confident chick beside me trying to get a record deal from audience participation.

SoulBounce favorite Eric Roberson closed the concert. I'd never seen him live before, but was sold from his first notes. The man clearly loves the stage and genuinely enjoys performing. Though the crowd had thinned out by this point, all who remained were live and engaged. An effortlessly skilled vocalist, Erro, unlike the other guy, was humble, gracious, and showed his team lots of love. He ended his set freestyling a song built around four random words provided by the audience ("equestrian," "proximity," graffiti," and "red purse.") Great laughs and cheers all around. An awesome entertainer, that dude.

On the way out, I bumrushed the lovely YahZarah--on behalf of SoulBounce, of course--who had on the meanest shoes of anyone in the room. I professed my love of her music, namely "Starship," which, she admitted has received the biggest fan reaction of everything on her latest, Ballad of Purple Saint James. I look forward to seeing her live very soon.

All in all, I had a good time, witnessed (mostly) great entertainment, and did some awesome networking...even though I encountered more gentlemen with shades indoors than I care to endure in a month's time.