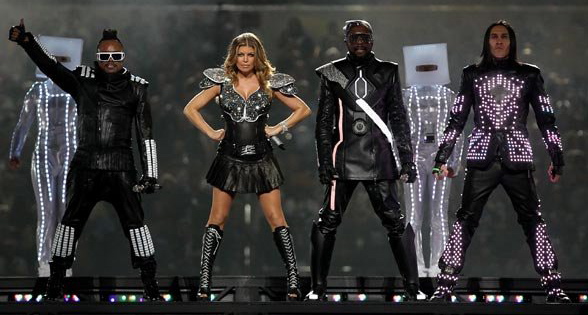 Face it. The Super Bowl Halftime show hasn't been the same since Justin Timberlake exposed Saint Damita Jo 's bejeweled, anointed breasticle back in 2004. Since then, with the exception of Prince's purple takeover in 2007, it has been a largely whitewashed, geriatric, generally boring affair. The most expensive bathroom break on television, if you will. This year, with Janet's terrorist teets years behind us, pop stars under 40 were brought back into the fold. Enter Fergie and the Black Beans the Black Eyed Peas. I can admit that I used to enjoy their earthy, quirky musical stylings years ago before they became a charity organization and got into the business of rescuing big-voiced lovers of drugs from euthanasia. Now, with their unrelenting string of pop-heavy, positivity-drenched, party anthems, Ebony & Ivory and the Boxcar Kids has become something of a never-ending commercial. Corporate-approved coonery in motion, even.

The mere thought of a Halftime show headlined by Raggedy-Faced Ann and The Pips instantly evokes images of plastic flat tops, overestimated vocal abilities on an international stage, and dancing, ethnically-ambiguous placeholders. And that's what they gave us. Taking you, the super-interested viewer, on a journey through some of their biggest chart smashes, the gang was equipped with a cotton bail's worth of super hero poses and special effects. There was even a football field of glow-in-the-dark flash mob dancers who, at one point, spelled out "give us us free" and a cameo by Guns N' Roses guitar shredder Slash.

And then came Uncle Usher. You know, discovering and signing ustin-Jay eiber-Bay was a gift and a curse for him. There are the obvious commercial benefits. But, as captain of the Self-Important Express, the father of two is now relegated to an eternity of reminding you that he is still hip, sexy, and able to sing dance like a decade ago. Uphill battle, much? At any rate, with the help of what must have been a magical girdle, Uncle Usher gave a good performance of a horrible song, "OMG," and dropped into the stage and back to hell.

Finally, the Kidney Beans closed out the set with "I Gotta Feeling," and I fought the urge to vomit up my childhood. It was then that I realized the group's power. I can't recall any other act in recent memory with a reach so broad, so unavoidable, so terrible. Their leather, bedazzled cloak of wackness is inescapable. Their Auto-Tuned, syphilic rhythm will, without fail, get you. If the Illuminati were anything more than the widely-believed invention of some disgruntled Bad Boy reject, I would venture to say its mastermind was a recovering meth addict with a husky voice and three empowered indentured servants.

They did, to their benefit, remember all the words (insert side-eye here).