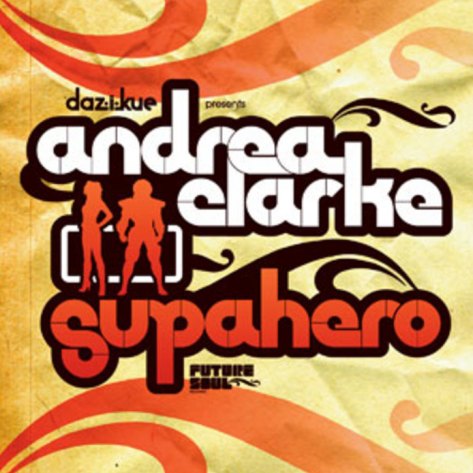 For the most part, any music describing itself as broken beat and/or dance is filed away for rainy day listening. It's not that I don't like the genres per se, rather it's that 95% of the stuff that lands in my inbox with those tags attached is utter trash. However, anything with either of those descriptions and the name Daz-I-Kue attached immediately gets bumped up my list. As a member of Bugz In The Attic, remixer extraordinaire, and the co-producer of Joy Jones' fantastic Godchild, I know that his name is synonymous with great, soulful music. When I heard, via the twitter-vine, that Daz would be producing an album for British singer/songwriter Andrea Clarke and releasing it on his label Future Soul Records, my interest was instantly piqued, I hadn't heard of her before but a quick scour of Google told me she had previously worked with Bugz In The Attic and the legendary Phil Asher, so I was as good as sold before I even pressed play on Supahero.The album combines--as you would expect--broken beat and electronic dance, but there are also heavy doses of hip hop and even a track or two that verge on downtempo. In lesser hands this may come off as more a compilation than an album proper, but it's all held together extremely well by Daz's production and Andrea's striking vocals. Take a listen to the inspirational title track below, and as a bonus check out the bonafide party-starter "Clap Your Hands." You can listen to a mini-mix put together by Daz featuring tracks from the album here, and, as always, the album is available from the usual digital retailers.
Center