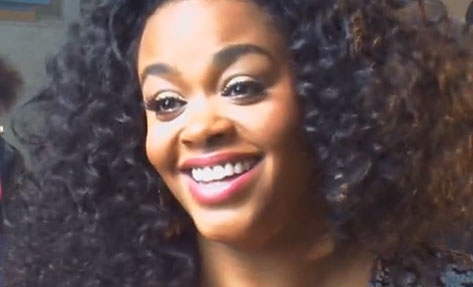 If seeing the name Jill Scott in the same sentence as the words "new video" doesn't have you smiling from ear-to-ear by now, then you might want to make an appointment with the doctor because something is clearly wrong with you. Jill's new video for the as-yet-unreleased song "Shame," the first single from The Light of the Sun, isn't exactly here yet, but she did film it this past Monday, and CNN was on the scene for this momentous occasion. Filmed on location in Philadelphia at the Cecil B. Moore Recreation Center, Jill explained to CNN how important it was to go back to her hometown to make this video and specifically to that rec center because it was such a part of her life growing up. When the center fell into disrepair and was scheduled to be torn down a few years ago, Jill's Blues Babe Foundation stepped in to fix it.

Returning to Philly to film the vid wasn't the only thing high on Jill's list for this new project. She's also tapping back into her hip-hop lover roots on the album, which doesn't have a drop date yet, but, with her new deal with Warner Brothers Records, has been confirmed for release this year. Hip hop was definitely in the building at the shoot with Eve, who also guests on "Shame," on hand in addition to Black Thought of The Roots.

Although we have yet to hear "Shame" in its entirety, the snippets played during this CNN report have us biting our nails down to nubs in anticipation. Jill looks fabulous, which is a regular occurrence, but more importantly she looks and sounds genuinely happy. Probably about as happy as we are to have her back.