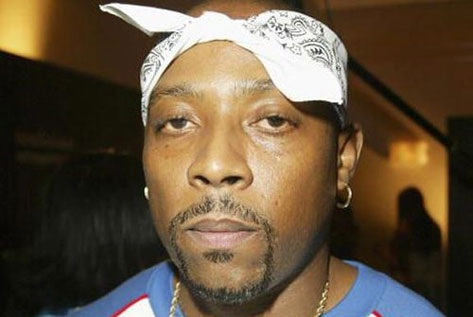 I'm having a hard time dealing with the fact that so many artists whose songs populate the soundtrack of my life are no longer with us. The latest to add his voice to the men's choir in heaven is Nate Dogg, who passed on less than a week ago and who was one of the smoothest singers to ever sing about gats, weed, and hoes. When news spread late last Tuesday night that he had died, many were in disbelief and waiting for more "official" sources to report the news. But when RIP messages from his homies were posted to Twitter and LA's KDAY broke from their playlist to play only Nate Dogg songs for the remainder of the night, that was all the confirmation that I needed. Listening to KDAY's online stream helped to remind me of Nate's greatness and also hipped me to the fact that there was so much music of his that I wasn't familiar with. Coming to the rescue to help me step my Nate Dogg game up and to memorialize the fallen crooner are two tribute mixes from DJ Premier and DJ Cuzzin B. Preem's 30-minute mix was recorded from his Hip-Hop Nation show last week, and Mixologist alum and True School member Cuzzin B breaks fans off with over an hour of hotness. Neither of these mixes are Nate Dogg 101. You may not find your jam or any commercial hits on either of these joints, but you will find two thorough mixes chronicling the musical legacy of a voice that helped to define the G-Funk era. Both mixes are also available for free download, because, well, it ain't no fun if the homies can't have none.